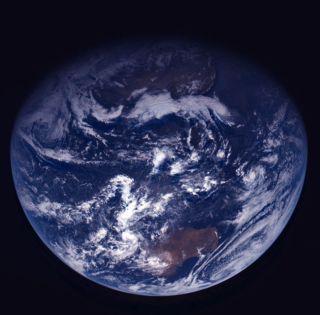 After its closest approach to Earth, Rosetta looked back and took a number of images using the OSIRIS Narrow Angle Camera (NAC). This particular image was acquired 15 November 2007 at 03:30 CET. The image is a colour composite of the NAC Orange, Green and Blue filters. At the bottom, the continent of Australia can be seen clearly.
(Image: © ESA)

AUSTIN, Texas—If Earth had been slightly smaller and less massive, life might never have gained a foothold.

They key to life on Earth as we know it, scientists figure, is plate tectonics — the forces that move continents and build mountains. And the more massive a world is, the thinner its plates are. Thinner plates are weaker and more easily moved and so able to support the kinds of crucial planet-shaping plate tectonics experienced on this planet over the billions of years that life evolved from simple one-celled organisms to complex creatures that can fly, swim and read.

"Plate tectonics are essential to life as we know it," said Diana Valencia of Harvard University, who presented research on the topic here Wednesday at a meeting of the American Astronomical Society. "Our calculations show that bigger is better when it comes to the habitability of rocky planets."

The study reveals Earth has been on the edge of habitability from the beginning, and just eked by to allow life-friendly conditions.

The results give hope to astronomers looking for life on other planets.

"It expands the potential to find life on other planets that are different from Earth," said astrophysicist Sara Seager of MIT, who was not involved in the study. She added that Valencia "has shown us that we can have hope that we can have life there."

Not too hot, not too cold

Plate tectonics , Valencia explains, is what allows the carbon cycle on Earth to operate. So as plates spread apart from each other, slide under one another, and even crash into each other to lift gigantic mountain ranges like the Himalayas, they also recycle carbon dioxide. This greenhouse gas acts as a thermostat to keep Earth balmy — but not scorching — over geologic time scales.

"Recycling is important even on a planetary scale," Valencia explained.

Valencia and her Harvard colleagues, Richard O'Connell and Dimitar Sasselov, examined so-called super-Earths more than twice the size of Earth and up to 10 times as massive. Any heftier and the planet would have enough tug to collect gas, transforming it into a Neptune- or Jupiter-like world, theory holds.

They studied planets roughly the age of Earth, because really old planets would have cooled off too much to support convection and plate tectonics.

The simulations showed that rocky orbs with masses three times that of Earth and greater should experience plate tectonics. Earth was found to be a borderline case, which is supported by the fact that the slightly smaller planet Venus is tectonically inactive. The reason for plate tectonics, Valencia said, might be water, because it weakens the plates through lubrication. That can nudge plate tectonics. Venus has no water.

"It might not be a coincidence that Earth is the largest rocky planet in our solar system, and also the only one with life," Valencia said.

As a rocky world gets more massive, the plates get thinner and so they are easier to move. That means super-Earths would be more geologically active than our planet.

"The bigger planets have more favorable conditions for plate tectonics than Earth does," Valencia told LiveScience.

To date, five super-Earths have been spotted, even though they are very difficult to detect with current technology. Each orbits close to its host star, however, and are too hot for life.

If super-Earths are as common as observations suggest, the researchers say it is inevitable that some will have Earth-like orbits within the habitable zones of their host star, making them comfy havens for life.

"There are not only more potentially habitable planets, but many more," said Sasselov, who is director of the Harvard Origins of Life Initiative.

He speculates our descendants in the far-future might consider a super-Earth for their next vacation, assuming some means of exotic propulsion were devised for the trip.

While this vacation would be "out of this world," Sasselov added the super-Earth destination would feel just like home. That is in terms of its geography. With more rapid plate tectonics, there would be less time for mountains and ocean trenches to form before getting recycled. That means a landscape where mountains soar no taller than those on Earth, for instance.

"The landscape would be familiar," Sasselov said. "A super-Earth would feel very much like home."