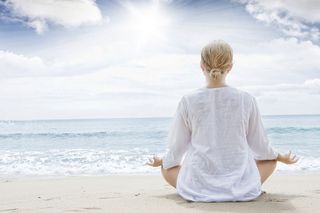 Meditation can reduce loneliness in older adults and can have a positive overall effect on their health, according to a new study.

Healthy adults who participated in an eight-week mindfulness program reported lower levels of loneliness on surveys, and positive changes in the expression of genes linked with inflammation compared with a control group, according to the researchers.

Studies have linked both loneliness and inflammation with a higher risk of Alzheimer's disease, cardiovascular disease and mortality, the researchers said.

"We always tell people to quit smoking for health reasons, but rarely do we think about loneliness in the same way," said study author J. David Creswell, a psychology professor at Carnegie Mellon University in Pennsylvania.

The researchers studied 40 healthy people between ages 55 and 85. Half of the participants underwent a program that consisted of group meetings, individual meditation practice and a daylong retreat. Participants learned about bodily awareness, and skills such as noticing sensation and breathing techniques. They were instructed to practice the techniques of mindfulness for 30 minutes daily.

At the end of the program, people who meditated scored, on average, a few points higher on a questionnaire designed to measure loneliness, compared with the control group, Creswell said. The difference in scores suggested that mindfulness exercises can improve feelings of loneliness.

"It's important to train your mind, like you train your biceps in the gym," he said.

In older age, people report feeling isolated regardless of the number of people they interact with, even closely, Creswell said. Instead, this type of loneliness involves feeling disconnected, and can increase with age, he said.

People who meditated also experienced changes in the expression of 143 genes, compared with the control group. The genes are all involved in the inflammation process.

These gene expression changes were "particularly significant, because inflammation contributes to a wide variety of the health threats including cancer, cardiovascular diseases and neurodegenerative diseases," said study author Steven Cole, a professor at the UCLA School of Medicine. However, he noted that the researchers did not measure what effect the reduction in inflammation had on participants' risk of these diseases in this study.

"You need to have a daily practice, of 15 to 20 minutes minimum, to see these benefits," he said.

The study was published online July 20 in the journal Brain, Behavior & Immunity.

Pass it on: Practicing mindfulness may help to reduce loneliness, which could make older adults healthier.