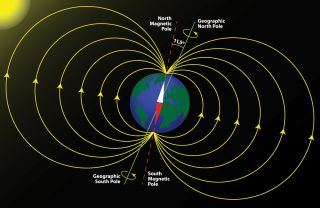 The solution to a long-standing puzzle, why magnetic north sits off the coast of Canada, rather than at the North Pole, may have been found in the strange, lopsided nature of Earth's inner core.

The inner core is a ball of solid iron about 760 miles (1,220 kilometers) wide. It is surrounded by a liquid outer core (mostly iron and nickel), a rocky, viscous mantle layer and a thin, solid crust.

In the last decade, seismic waves from earthquakes revealed the inner core looks like a navel orange, bulging slightly more on its western half. Geoscientists recently explainedthe asymmetry by proposing a convective loop: The inner core might be crystallizing on one half and melting on the other.

Olson and Deguen found that adding inner-core asymmetry shifted magnetic north away from the center of the Earth, into the cooling hemisphere. Convection was stronger there, as was the magnetic field.

"The lopsided growth of the inner core makes convection in the outer core a little bit lopsided, and that then induces the geomagnetic field to have this lopsided or eccentric character too," Olson told OurAmazingPlanet. Olson and Deguen's research was detailed online July 1 in the journal Nature Geoscience.

Geophysicist Bruce Buffett said Olson and Deguen’s research is intriguing, but there are still questions about the underlying theory. "It's an interesting result, but we don't know for sure the inner core is translating. The model does a good job at explaining some but not all of the features of the inner core," said Buffett, a professor at the University of California, Berkeley, who was not involved with the research.

Olson points out that his numerical model offers a real-world proof of the theory. Magnetic particles trapped and aligned in rocks reveal that the magnetic north pole wandered around the Western Hemisphere over the past 10,000 years, and circled the Eastern Hemisphere before that — a result mirrored by the numerical test. Gathering a longer, more detailed record of the magnetic field's behavior, Olson said, could reveal whether the inner core acts as researchers predict.

"The key question for interesting ideas like translational instability is, 'Can we test it?'" Olson said. "What we're doing is proposing a test, and we think it's a good test because people can go out and look for eccentricity in the rock record and that will either confirm or shoot down this idea."