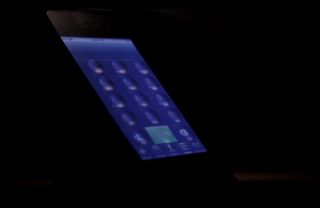 A new touch screen display can morph buttons on command for smartphones or other mobile computing devices.
(Image: © Tactus Technology )

A new touch screen can transform its flat surface into real physical buttons for smartphone or tablet owners. The morphing screen technology could give mobile device users a keyboard experience on demand, but without entirely losing the smooth, flat touch-screen surface.

The interface uses micro-level control of fluids to raise buttons or shapes of different heights, sizes and firmness — and can make them disappear just as quickly. Such a panel normally appears as a flat, transparent surface that can easily replace the standard touch-screen displays on existing smartphones, tablets, ebook readers and handheld gaming devices.

California-based Tactus Technology teamed up with Touch Revolution to show off its Tactile Layer technology for the first time on a prototype Google Android tablet at the Display Week 2012 conference in Boston.

"Touch Revolution is very excited to announce this new partnership with Tactus Technology — their solution is an ideal and revolutionary complement to our own industry-leading touch screens," said Mark Hamblin, founder and CTO of Touch Revolution. "We are looking forward to seeing new mobile and consumer devices using our combined technologies in 2013."

Most flat touch screens have relied upon vibrating "haptic feedback" tricks to make people's fingers feel more comfortable. Nokia has even hinted at magnetic tattoos that would allow smartphone owners to feel the vibrations related to cellphone alerts on their skin.

One Japanese company has also experimented with the idea of allowing users to mold the shape of touch screens like high-tech Play-Doh. But that remains a novel tech demonstration — the new Tactile Layer could transform mobile computing devices much sooner by giving them a more natural feel.