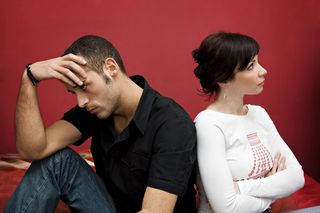 Over a 20-year study, the amount of fighting among couples remained at largely the same level throughout their marriages.
(Image: © Dreamstime)

Married couples are generally pretty good at recognizing each other's emotions while they are arguing, new research suggests. But if your partner is angry, that might tell more about the overall climate of your marriage than about what your partner is feeling at the moment of the dispute, the researchers said.

"If your partner is angry, you are likely to miss the fact that your partner might also be feeling sad," study researcher Keith Sanford, of Baylor University, said in a statement. "I found that people were most likely to express anger, not in the moments where they felt most angry, but rather in the situations where both partners had been feeling angry over a period of time."

"This means that if a couple falls into a climate of anger, they tend to continue expressing anger regardless of how they actually feel," he said. "It becomes a kind of a trap they cannot escape."

The study was published online April 30 in the Journal of Family Psychology.

Spats between married couples that might fester and build anger over time are usually about things like in-laws, chores, money, affection and time spent on the computer.

Sanford found that when people express anger, they often also feel sad. But while a partner will easily and immediately recognize expressions of anger, the spouse often will fail to notice the sadness.

"When it comes to perceiving emotion in a partner, anger trumps sadness," he said. Previous research has found that genuine expressions of sadness during a conflict can sometimes draw partners closer together, and it potentially can enable couples to break out of a climate of anger.

"A take-home message is that there may be times where it is beneficial to express feelings of sadness during conflict, but sad feelings are most likely to be noticed if you are not simultaneously expressing anger," Sanford said.

Sanford analyzed reports by 83 married couples and observations and rating of their behavior by research assistants, who were given permission by the couples to videotape them through a one-way mirror.

Couples were asked to choose two areas of conflict and talk to each other about them — one chosen by the wife, the other by the husband. They also were asked to rate their emotions and those of their partners before and after each discussion.

Couples' "insider knowledge" of one another might be expected to make it easier for them to read each other, Sanford said. But the only time in which couples made significant use of insider knowledge to distinguish emotions was in interpreting "soft" emotions — such as sadness or disappointment — in conflicts about specific events, the study showed.

While women expressed soft emotions more, they were no better at perceiving hard or soft emotions, Sanford said.