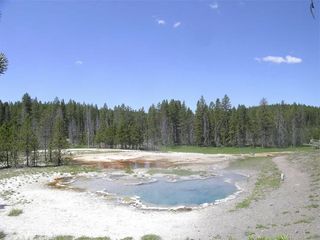 Yellowstone’s ancient volcanic floor has been rising since mid-2004 because a blob of molten rock the size of Los Angeles infiltrated the system 6 miles beneath the surface, scientists say, but there is no risk of an eruption.

Yellowstone National Park is the site of North America's largest volcanic field, which is produced by a hotspot, or gigantic plume of hot, molten rock, that begins at least 400 miles (643 kilometers) beneath Earth's surface and rises to 30 miles (48 kilometers) underground, where it widens to about 300 miles across.

Occasionally, blobs of magma break away from the top of this plume and rise up to resupply the magma chamber beneath the park's "caldera," a 40-mile by 25-mile bowl-like depression and volcanic leftover whose walls you can see in the northwest part of the park.

These rising blobs of magma can sometimes push on the caldera floor, causing it to rise. Scientists monitoring the Yellowstone caldera think that's exactly what has caused the caldera floor to rise by almost 3 inches (7 centimeters) per year over the past three years—more than three times faster than it has more typically risen since observations began in 1923.

"Our best evidence is that the crustal magma chamber is filling with molten rock," said study leader Robert Smith, a seismologist at the University of Utah. "But we have no idea how long this process goes on before there either is an eruption or the inflow of molten rock stops and the caldera deflates again."

Smith and his colleagues, whose work is detailed in the Nov. 9 issue of the journal Science, say that there is no indication that the caldera will produce an eruption anytime soon.

"There is no evidence of an imminent volcanic eruption or hydrothermal explosion. That's the bottom line," Smith said. "A lot of calderas worldwide go up and down over decades without erupting."

Other well known calderas include California's Long Valley and Italy's Campi Flegrei, near Naples, which have both been known to rise and subside again for even tens of thousands of years without erupting.

The recent uplift of the Yellowstone caldera, recorded by GPS and satellite radar measurements, is considerably faster than the previous record of 0.8 inches (2 centimeters) per year from 1976 to 1985.

Smith and his teams used computer simulations to determine changes in the shape of the magma chamber, which acts as a sponge-like body that holds magma between areas of solid rock. They found that the magma pushing up on the caldera is likely about 38 miles long and 13 miles wide, about the area of the city of Los Angeles, but only tens to hundreds of yards thick.

The magma that accumulates in the chamber powers Yellowstone's famous geysers and hot springs, the largest hydrothermal field in the world.