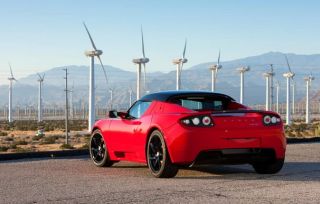 A Tesla Roadster sits on the side of the road next to wind turbines.
(Image: © Tesla Motors)

Americans love to celebrate an individual-minded U.S. culture that has produced great innovators such as Thomas Edison or Steve Jobs. But recent research suggests the individual entrepreneur or scientist may not hold the only key to a country's innovation engine.

Two fascinating patterns emerged in a recent study covering 20 years worth of data on culture and innovation around the world. First, individualistic cultures did enjoy higher rates of innovation, but innovation had a weak link to freedom for independent thinking — the bread and butter of innovators. Second, some countries with a strong "institutional collective" attitude of patriotism or nationalism enjoyed high rates of national innovation alongside the U.S. and more individualistic countries.

"Japan, Singapore, South Korea, Sweden, and Taiwan are all examples of national cultures which rank as both highly institutional collective and highly innovative," said Mark "Zak" Taylor, assistant professor of international affairs at the Georgia Institute of Technology in Atlanta.

Such countries have people who often value loyalty to a corporation, university or nation far more than local "tribes" or themselves as individuals. Their willingness to sacrifice at the expense of the individual allows their societies "to take the risks and make the hard sacrifices to innovate," Taylor said.

But unlike nationalism or patriotism, a "tribal" collective culture based on loyalty to family and friends — common in countries such as the Philippines, India, Turkey, Mexico, Argentina and Portugal — had a negative impact on innovation.

Is the innovator or consumer king?

Individualistic countries like the U.S. did well on measures of innovation, such as highly cited technology patents or scientific publications, but their success could not be explained by the weak connection between independent free-thinking and innovation. Instead, innovation had a strong link to the freedom allowing for the individual pursuit of happiness.

One possible explanation is that innovators thrive in an individualistic culture that allows them to do what makes them happy. But Taylor suggests that individualistic consumers who demand new technologies and goods for their happiness may also play an overlooked role (In other words, it could be more about the iPhone shoppers and less about Steve Jobs).

"My point here is more that the consumer is often forgotten in innovation studies," Taylor told InnovationNewsDaily. "Instead, we tend to focus on the supply side of innovation: the intrepid scientists, inventors, entrepreneurs who create new technology and the businesses and industries upon which they are based." [Thomas Edison: America's First Modern Innovator]

The study had other twists as well. The individual freedom to pursue happiness had a stronger positive effect on scientific publications rather than technology patents. By contrast, a country's patriotism and nationalism appeared to give a bigger boost to technology rather than science.

Take with a grain of salt

Taylor is first to admit that measuring culture and innovation can prove tricky — and he was quick to bring up the reminder that correlation between innovation and culture does not mean cause and effect. Still, he drew upon past surveys involving tens of thousands of people over many years to cancel out possible "noise" and errors to find the clearest patterns.

"By far my strongest finding is that individualism aids innovation," Taylor said. "No matter which measure I used for individualism, or for innovation, or regardless of what other factors were controlled for, the correlation came through strong and significant."

Culture also represents just one of many factors affecting innovation, Taylor cautioned, and so a negative cultural impact does not automatically doom a country's innovation. But he still found that individualism (or lack thereof) had a big impact on innovation even if its importance was balanced among many factors.

Whatever their cultural mindset, countries cannot expect to simply ride waves of patriotism or individual happiness-seekers to the top of the innovation charts. Each country must also reward its citizens for pursuing the science and technology careers or entrepreneurial startups that lead to innovation.

"Yes, societies with individualistic or institutional-collective cultures should be relatively more innovative than others," Taylor said. "But if becoming a mullah, rock star, soldier, painter, drug kingpin, etc., brings you more wealth, recognition and respect than being a scientist or entrepreneur, then a country’s best and brightest will choose those former careers and try to innovate (or not) there."

So what countries look among the most promising for future innovation? Taylor pointed to Denmark, New Zealand and Australia as ranking highly on cultural individualism. The latter two countries have invested more in natural resources and agriculture rather than high-tech industry, but they could change their tune — and future prospects — with the right societal nudges and rewards.

"If perhaps three to four percent of GDP in government spending in Denmark, New Zealand or Australia were reallocated to reward and incentivize science and technology, then maybe the best and brightest would switch over, and you would see technological powerhouses develop in these countries," Taylor said.

The study, Does Culture Still Matter?: The Effects of Individualism on National Innovation Rates, is detailed in the March issue of the Journal of Business Venturing.