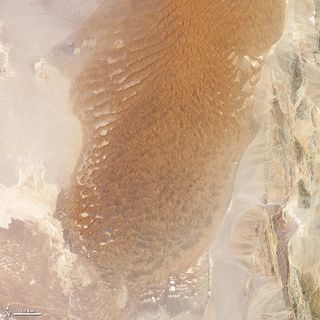 The title of "world's hottest place" is often bestowed upon El Azizia, Libya, where the highest temperature ever measured on Earth was recorded, but a study of satellite temperature data shows that the crown belongs elsewhere, and that it can shift from year to year.

El Azizia took the record for highest temperature ever recorded on Sept. 13, 1922, when a thermometer on a weather station hit a whopping 136 degrees Fahrenheit (58 degrees Celsius), thanks to southerly winds blowing in hot air from over the Sahara Desert. The sweltering temperature displaced the previous record holder of 134 F, measured at the Furnace Creek weather station in Death Valley on July 10, 1913.

But neither of these places, hot though they may be, deserves the banner of "hottest place on Earth," according to new research by a University of Montana team using data from the U.S. Geological Survey's Landsat satellites.

"Most of the places that call themselves the hottest on Earth are not even serious contenders," said team member Steven Running in a NASA statement.

Running and his colleagues examined seven years of infrared data (which indicates temperature) from the Landsat satellites, and found that the winner in five of those years was actually the Lut Desert in Iran.

The reason Lut didn't previously make the list was because "the Earth’s hot deserts — such as the Sahara, the Gobi, the Sonoran and the Lut — are climatically harsh and so remote that access for routine measurements and maintenance of a weather station is impractical," said team member David Mildrexler. "The majority of Earth's hottest spots are simply not being directly measured by ground-based instruments."

Satellites, on the other hand, can get a reading on these hard-to-reach, harsh places because they can scan every piece of the Earth's surface. The satellites take what is called "land skin temperature," which tells the amount of heating of a certain parcel of ground from the sun, the atmosphere and other heat sources. The temperatures measured at weather stations, on the other hands, are taken a couple meters above the ground.

While the location of the hottest place on Earth might shift from year to year, the conditions that give rise to it remain the same: Dry, rocky and dark-colored lands are good at absorbing heat, while lighter sand will tend to reflect more sunlight. When comparing natural-color images from Landsat of the Lut Desert to the infrared images, the darker areas show up as the hottest ones.