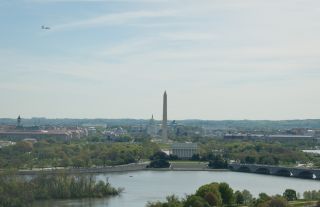 Two of NASA's T-38 training jets flew approximately 1,500 feet (457 meters) above Washington this morning to photograph the area and conduct training exercises. This maneuver over what is normally restricted airspace was arranged by the space agency and the Federal Aviation Administration.

NASA released a series of photos of the mid-morning T-38 flyover, including one with two easily recognizable landmarks in the background: the Washington Monument and the U.S. Capitol Building.

The T-38 supersonic jets have long been used to train pilots, and they have been an integral part of astronaut training for more than 30 years at NASA.

The sleek, white jets require pilots and mission specialists to think quickly in fast-changing situations, helping astronauts gain the mental practice needed for the rigors of spaceflight, agency officials said in a statement.

"It's actually our most important training that we do as astronauts," Terry Virts, who piloted the space shuttle Endeavour on its STS-130 mission, said in a statement. "It's the one place where we're not in a simulator. It's real flying and if you make a mistake, you can get hurt or break something or run out of gas. There are a lot of things that happen real-world in a T-38 that don't happen in the simulator."

The T-38 flyover comes less than two weeks before the city will celebrate another special aeronautic occasion: the delivery of the space shuttle Discovery to the Smithsonian's National Air and Space Museum.

The retired space shuttle is slated to be transported from NASA's Kennedy Space Center in Cape Canaveral, Fla. to Washington Dulles International Airport atop a modified Boeing 747 aircraft on April 17.

Once the precious cargo touches down at Dulles, the orbiter will be moved into its display area at the museum's Steven F. Udvar-Hazy Center, which is adjacent to the airport.