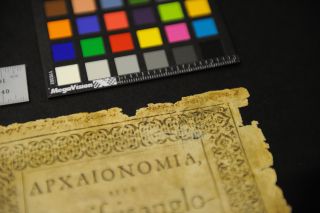 A barely legible signature suspected to be William Shakespeare's is scrawled across the upper righthand border of the page.
(Image: © UM photo by Robert Jordan)

Researchers using high-tech photography have reconstructed a signature that may belong to William Shakespeare — or perhaps a clever forger.

It's not yet known who scrawled "Wm Shakespeare" across the title page of the legal treatise "Archaionomia," a collection of Saxon laws published during the reign of Elizabeth I of England. It may never be clear, said Gregory Heyworth, a professor of English at the University of Mississippi.

But now, Heyworth and his students have used new technology to reveal the nearly lost scribbles on the old book. The work is part of The Lazarus Project, an effort to revive damaged texts using a technique called multispectral imaging. The researchers take very high-resolution photographs of old text, art or objects using 12 different wavelengths of light, ranging from ultraviolet to infrared, beyond the boundaries of the human eye. Next, they use software to combine these images into the clearest possible picture of the text.

In this way, researchers can reconstruct writing that has been erased and written over, scratched out, singed or even damaged by water, Heyworth told LiveScience. For example, last year, the Lazarus Project used this technology to discover five new poems from the writer William Faulkner from a collection that had been damaged by fire.

This spring, Heyworth took a group of undergraduates to the Folger Shakespeare Library in Washington, D.C., to investigate a scrawl that believe to be the Bard's. The team hasn't yet begun the process of authenticating the signature as Shakespeare's, but they did reconstruct it.

"We have a clear idea now of what the signature looks like, and we can compare it to Shakespeare's signatures and forgers' signatures," Heyworth said.

The group is currently deciphering a line above the signature, which is written in a 16th-century hand based on the style of the lettering, Heyworth said. That line is written in different ink than the signature. [History's Most Overlooked Mysteries]

On the Bard's trail

Heyworth plans to compare the signature with that of well-known forgers as well as known Shakespeare signatures such as those on his wills. He also hopes to investigate other potential Shakespeare handwriting samples, including one in a book of essays published in 1603.

If Shakespeare can indeed be linked to the Archaionomia signature, it could give new insights into the way he approached the law in his plays, Heyworth said. It may also illuminate Shakespeare as a man and historical figure.