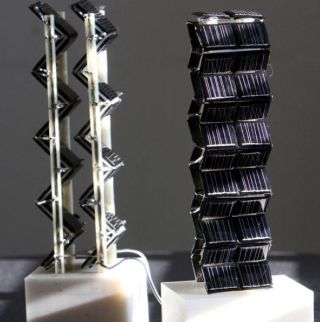 Harnessing the power of sunlight can mean more than just laying solar panels on rooftops or putting them on motorized swivels to track the sun across the sky. MIT researchers have built solar panel towers and cubes capable of generating as much as 20 times more power compared with fixed, flat panels with the same base area.

The 3D solar panel structures have a higher price tag compared to ordinary flat panel installations, but can create higher energy output for a given size physical footprint. The solar towers also collect much more sunlight during the mornings, evenings and winters all days of the year regardless of clouds or shadows — possibly making solar power a much more reliable source of energy for the power grid.

"I think this concept could become an important part of the future of photovoltaics," said Jeffrey Grossman, a professor of power engineering at MIT.

The MIT team made their tallest tower in an accordion shape that "you could ship flat, and then could unfold at the site," Grossman said. He added that such portable solar towers might end up acting as charging stations for electric cars.

Computer models helped the researchers simulate how well different 3D configurations might work under different latitudes, seasons and weather. The team also built and tested three arrangements of solar cells on the roof of an MIT lab building for several weeks.

Their efforts led to power boosts ranging from double the usual energy output to 20 times the energy output of fixed, flat solar panels. The biggest power boosts came in scenarios such as locations far from the equator, in winter months and on cloudier days.

Next, the team wants to see how to arrange such towers to account for the shadows they would cast on one another throughout the day. Its latest findings are detailed in the journal Energy and Environmental Science.

The MIT team has already shown "proof-of-concept evidence that 3D photovoltaic elements could provide significant benefits in terms of capturing light at different angles," said David Gracias, an associate professor of chemical and biomolecular engineering at Johns Hopkins University who was not involved in this research.

Gracias also pointed to the future challenge of mass-producing such solar towers in a cost-effective manner. But Grossman says the time is right for 3D solar panel configurations — mainly because the cost of solar cells has fallen in recent years.

"Even 10 years ago, this idea wouldn’t have been economically justified because the modules cost so much," Grossman says. But now, he adds, "the cost for silicon cells is a fraction of the total cost, a trend that will continue downward in the near future."