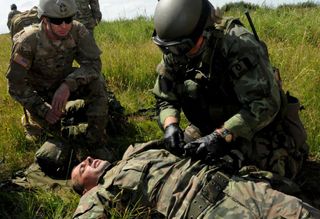 Disease has stalked battlefields since the dawn of war and continues to plague even the ranks of the modern U.S. military. That's why the Pengaton's scientists want to implant tiny particles inside the bodies of soldiers that could diagnose or even treat illness from within.

The military's Defense Advanced Research Projects Agency (DARPA) announced its vision for implantable "nanosensors" on March 15. Such tiny sensors would be based on nanoparticles thousands of times smaller than the width of a human hair — a watchful swarm of molecules inside soldiers' bodies that could monitor their health around the clock and keep them healthy on the most remote battlefields.

Solving the problem of sickness could have a huge impact on the number of soldiers ready to fight, because far more have historically died due to illness rather than combat. Even in modern times, battle injuries have accounted for only 20 percent of medical evacuations from Iraq — the U.S. military had to evacuate four times as many troops because of disease and nonbattle injuries.

The futuristic idea might prove especially helpful for U.S. Special Forces who must operate far from any immediate medical help. Nanosensors could alert Special Forces operators if they become exposed to an infectious disease or simply push their bodies beyond their physical limits.

"For military Special Forces the practical realization of implantable nanosensors capable of monitoring multiple indicators of physiological state could be a truly disruptive innovation," according to DARPA's announcement.

This first announcement focuses on creating nanoparticles capable of diagnosing diseases, but DARPA expects to launch a second effort focused on treatment in late 2012. Once it gathers proposals from private companies and academic researchers, it can begin moving forward with animal trials that might eventually lead to human clinical trials.

DARPA's announcement also emphasizes that any tiny sensors based on nanoparticles must avoid harming their hosts because of any unknown material or particle effects on the human body. That issue of nanoparticle safety and the perils of small stuff are still being studied by researchers.