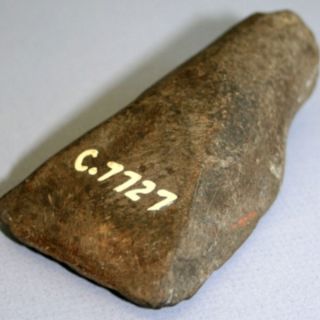 Big news about the adze this week.

Your first question might be, of course, what the heck is an adze? We live and breathe "ads," as in advertisements, but "adze?"

An adze is tool that looks like an ax but with the blade turned at a right angle.

It's a handy tool. Swing it overhead and down in an arc on a piece of wood and gouge out a big chunk with one fell swoop, or plane down the surface of a finished wooden object with finer strokes.

Obviously, it takes skill to use an adze given the dangers of taking off a toe, a finger or ending your sex life.

Although one might be hard pressed to find an adze today (unless you're a woodworker), adzes have been part of human history ever since people began making things.

During the Stone Age, early humans chipped away at hunks of rock to make hand-held adzes which were probably used to butcher animals or fashion other tools. The Egyptians refined the adze by making it from metal and then mounting the blade on a wooden handle. Other cultures made their adzes out of whatever was at hand—shell, wood, bone—anything that would slice and dice.

The adze can also be a key to mapping ancient human migrations because it's portable.

This week, Kenneth Collerson and Marshall Weisler of the University of Queensland, Australia, announced they have traced the sea voyages of adzes, and therefore people, into the far reaches of the eastern Pacific Ocean 4,000 year ago.

Peopling the Pacific was an adventure of mythic proportions. For centuries, no one believed that the Pacific Islanders got there under their own steam (or sail). Instead, the story went, these "primitive" people must have been out for a leisurely Sunday sail when the seas shifted and a coral atoll rose up and beached their boat, forcing them to settle down and make do.

But research tracing pottery types, canoe designs, fish hooks and common language eventually demonstrated that long ago people must have been voluntarily crisscrossing the vast Pacific in search of new homes. More recently, experimental voyages in replica canoes with sails also showed that long sea voyages were not only possible, but probable, even 4,000 years ago.

Collerson and Weisler have underscored the seafaring skills of these early people by analyzing the origins of trace elements in the basalt rock of stone adzes found across the remote Eastern Polynesian Islands, specifically the Tuamotu Islands, where there is no endemic basalt.

The researchers found that the basalt used in adzes came from five different atolls ringing the Tuamotus, and each atoll is thousands of kilometers away.

For example, one adze originated on Kasho'olawe, Hawaii, more than 4,000 kilometers away. There are no such ancient adzes on Kasho'olawe, but the basalt is easily found along the shoreline where modern sailors still conduct ceremonies before long seas voyages.

Long ago, Hawaiians must have had adzes on board as they set sail for the great unknown. Or maybe they casually pitched a few beach stones into the bottom of the boat for ballast and then threw them out after reaching Eastern Polynesia.

The adzes, evidence of a monumental journey, might then have been carved by Tuamotu Islanders who were smart enough to figure out what to do with the garbage of passing tourists.