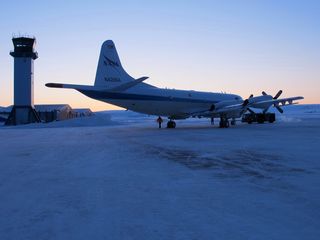 Dawn over the P-3B aircraft and the Thule airport tower in Greenland.
(Image: © NASA/Jim Yungel )

NASA's Operation IceBridge is back in action, flying over the icy expanse of Greenland and the coat of sea ice over the Arctic Ocean during the opening week of its 2012 Arctic campaign.

A modified P-3 from NASA's Wallops Flight Facility in Virginia is flying daily missions through mid-May out of Thule and Kangerlussuaq, Greenland — with one flight to Fairbanks, Alaska and back — to measure sea and land ice.

The mission, which began March 13, is a continuation of IceBridge's effort over the last several seasons to keep a continuous record of ice conditions in Antarcticaand the Arctic after NASA's ICESat  (Ice, Cloud and Land Elevation Satellite) stopped collecting data in 2009. Satellite observations will pick back up with the anticipated launch of ICESat-2 in 2016.

NASA says IceBridge will monitor sites it has flown over on previous missions, such as Greenland's Jakobshavn Glacier, as well as sites it hasn't covered, including unstudied areas of sea ice in the Beaufort Sea north of Alaska.

"The most important sea ice flights are the transits between Thule and Fairbanks," said project scientist Michael Studinger.

Instruments aboard the P-3 can measure the elevation and thickness of sea ice, as well as snow depth. Radar instruments allow scientists to see through land ice to the bedrock below. A gravimeter similarly allows researchers to see below the sea ice to the depth of the water column below.

A Falcon jet due to join the P-3 from NASA's Langley Research Center in Hampton, Va., April 19 will carry a high-altitude laser altimeter, the Land, Vegetation, and Ice Sensor (LVIS). It flies higher and faster than the P-3, which will allow it to go on longer flights and survey a 1.2-mile-wide (2 km) swath of ice. This capacity will be particularly important in surveying near coastal areas of Greenland, and in sea ice flights out of Thule.

Depending on flight schedules, either the P-3 or the Falcon also will help test a laser altimeter that simulates the one destined for ICESat-2.

Another new aspect to this year's mission is the participation of five science teachers from the United States, Denmark and Greenland. They will spend several days working with IceBridge scientists and participating in survey flights.

"I hope to get a better understanding of polar science and bring that knowledge back home to both students and educators," said Tim Spuck, a high school teacher from Oil City in northwestern Pennsylvania who is the lone U.S. representative.