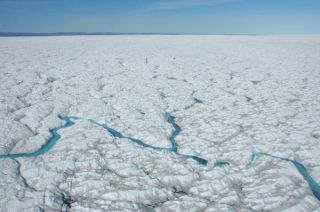 Melt water channels pouring into moulins at the surface of the Greenland ice sheet, 15 km east of the town of Kangerlussuaq on the western-central coast.
(Image: © Jason Box.)

The underside of a glacier doesn't sound like the coziest of dwellings, but at least two types of bacteria call it home, a new study finds.

Chryseobacterium and Paenisporosarcina may be able to thrive at the base of glaciers in the Greenland and Antarctic ice sheets, scientists determined through lab experiments involving specimens of both.

The finding, detailed in a recent issue of the journal Environmental Microbiology Report, could have implications for the search for life on Mars, said study researcher Corien Bakermans, a microbiologist at Penn State Altoona.

On Earth, glaciers and ice sheets constitute large ecosystems covering more than 10 percent of the surface and containing approximately 78 percent of the world's fresh water.

To see how well bacteria might grow at the bottoms of glaciers, researchers collected specimens of Chryseobacterium and Paenisporosarcina from two locations at the base of the East Antarctic Ice Sheet and submitted them to laboratory conditions meant to simulate as closely as possible the temperatures and nutrient content found at the bottom of Arctic and Antarctic glaciers.

The researchers monitored the levels of carbon dioxide in the lab ice as a sign of bacterial respiration and concluded that respiration was occurring at temperatures as low as minus 27 degrees Fahrenheit (minus 33 degrees Celsius) and as high as 24 F (minus 4 C). The respiration rate of the microbes increased as the temperature rose.

Bacteria seem to grow best in cracks and crevices within the ice, said Bakermans. The cracks serve as channels for water and nutrients to circulate.

"It's hard for nutrients to be exchanged in the ice," Bakermans said. "But these channels appear to give the microbes access to nutrients."

In addition, the bottom of glaciers may be more hospitable for the microbes than other parts of the glacier because the areas draw warmth and nutrients from the earth.

The research, funded by the National Science Foundation, might aid in the search for life on other planets, including Mars, that have temperatures ranges like the ones in the study, Bakermans said.

"Although there are a lot of other factors involved for life to take hold on other planets," Bakermans said, "we can still say that if microbes on Earth can do this, then there's the potential, at least, that microbes can do this on Mars."