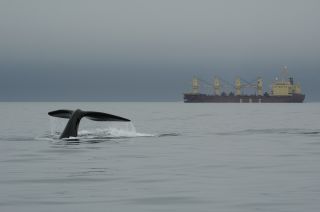 Right whales share their environment in the Bay of Fundy with noisy cargo ships. The noises are so low and loud it would take weeks to fully dissipate from the ocean, even if all ships were stopped.
(Image: © New England Aquarium)

Quiet oceans make for calmer right whales, new research suggests. When fewer ships sail the Bay of Fundy, the big baleen whales are less stressed — as evidenced by hormone levels in their poop.

This stress could be one reason the North Atlantic population of right whales, which spend part of their lives in the Bay of Fundy off the East Coast, is having such a hard time reproducing. If the sounds chronically stress them, they could be more prone to disease and it could possibly interfere with their ability to reproduce, the researchers say.

"We know that whales have responded to underwater noise by changing their vocalization, but we didn't know if they responded with physical changes as well," study researcher Rosalind Rolland, of the New England Aquarium in Boston, told LiveScience. "What this study has shown is that they are having a measurable physiological stress response to the noise in their environment."

Right whales use their calls to communicate across long distances. They use low frequencies because they carry farther, but these are similar to the frequencies made by ocean-going ships. Previous studies have shown that noise levels can impact the whales' behaviors, including where they swim and how they vocalize. It's like trying to talk at a party — often a lot of noise will make you either speak louder or, in the worst cases, wait until later to make your point. What the researchers didn't know is how noise may be impacting the whales physically.

The researchers analyzed noise recordings from September 2001, in areas of the Bay of Fundy where the whales generally reside; they then compared them with samples of whale poop collected by researchers in 2001 through 2005. They were looking for evidence that decreased ship traffic after the tragic events of 9/11 lowered the whales' stress hormone levels.

In the two days before 9/11, nine ships passed through the Bay, but in the two days after, only three ships passed through. This led to a significant decrease in low-frequency noise in the Bay and a drop in the intensity of the noise, they found. This coincided with a drop in stress-hormone levels in the whales' fecal samples: Compared with before Sept. 11, hormone levels were significantly lower after Sept. 11 … only in 2001.

"Compared to the four following years, there was something different that affected their baseline stress levels," Rolland said. "A big decrease in their fecal stress hormones — that tells me the whales are responding to the noise in their environment with stress."

The researchers believe that these chronically high stress levels can cause behavioral changes and can impact the whale's immune and reproductive systems. We haven't figured out how to take a whale's blood pressure, but the stress system is the same in whales and other vertebrates, including humans.

"The stress pathway is the same, it doesn't matter if you are turtle or a human being," Rolland said. "It's chronic, continual stress that's known to suppress the immune system and reproduction.You can't measure that directly in whales, but there's really no question it applies to whales as well."

The unplanned nature of the study means it has some caveats. A longer-term study (with more data points) comparing ship-traffic fluctuations and the stress hormones from whale feces could establish a more reliable trend in the data, said Hans Slabbekoorn, a researcher from Leiden University in the Netherlands, who wasn't involved in the study.

"It is possible that the statements by the authors reflect reality about a decline in stress levels in 2001 after a decline in vessel-related low-frequency noise levels," Slabbekoorn wrote in an email to LiveScience. But, he added, "I had a thorough look at the paper and I cannot say that I am very happy with the paper as a scientist."

Not all researchers agree with Slabbekoorn's assessment, though. Most were positive about the study and data.

"You can't control the ocean. You can't do a nice controlled experiment where you can tease out each possible effect. So this is about as close as you can get," Lindy Weilgart, a researcher at Dalhousie University, in Nova Scotia, who wasn't involved in the study, told LiveScience. "I think this one [study] comes closest to tying an effect to a population impact, and that's the Holy Grail that you are looking for: How damaging is noise on the population?"

The study will be published Feb. 8 in the journal Proceedings of the Royal Society B: Biological Sciences.