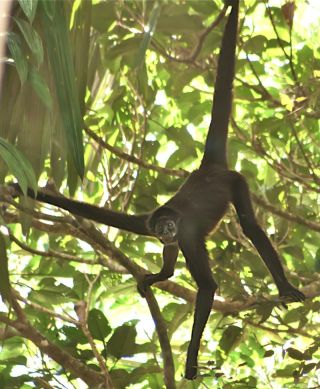 Researchers have spotted one of the rarest primates on Earth in a national park in Colombia.

A subspecies of the brown spider monkey (A. h. brunneus) was seen in Colombia's Selva de Florencia National Park, the only national protected area with a confirmed population of the critically endangered monkeys.

When the park was created in 2005, the only known A. h. brunneus in the region was living in captivity, and the monkeys were thought extinct in the area.

Yet in November 2011, a local farmer reported the possible presence of the species, setting off a furious search for the rare primates, during which park officials and researchers with the Wildlife Conservation Society spotted at least two individuals living in Selva de Florencia.

The population has dropped by at least 80 percent over the last five decades, and is continuing to decline, according to the IUCN.

"The fact that the species was found in a protected area gives conservationists hope that populations will be safeguarded and can perhaps even grow in number," Julie Kunen, director of Latin America and Caribbean programs for the WCS, said in a statement.

Brown spider monkeys spend much of their time high up in trees, foraging for ripe fruit, suspended in the branches with the help of their long, slender limbs and prehensile tails.

With limbs and tails splayed out in the canopy, the monkeys often look as though they have five limbs — thus the name spider monkey.

Like other spider monkeys, the brown spider monkey reproduces slowly. Typically the monkeys give birth to a single baby only once every three or four years.