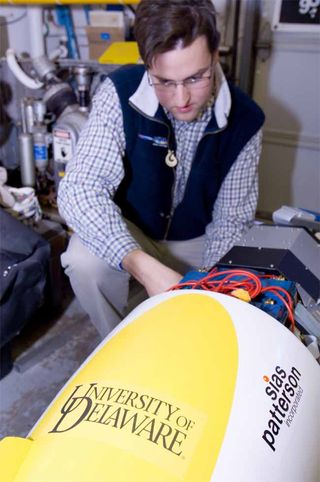 The explorer who discovered the Titanic shipwreck now plans a robotic expedition to look for sunken ships on the floor of the Black Sea as well as clues to its geologic history.

Robert Ballard, a University of Rhode Island oceanographer whose team located the long-lost RMS Titanic in the North Atlantic in 1985, will lead the new effort that will rely on an autonomous underwater vehicle called DOERRI, short for Delaware Oceanographic and Environmental Research Remote Instrument. The vehicle will dive into the depths of the Black Sea as well as the Aegean Sea. In ancient times, both waterways were major trade routes.

"This is a truly exciting expedition that will shed light on important geological features in the Mediterranean while also uncovering vital information about ancient trade routes and the maritime history of the Black Sea," Ballard said.

Expedition member Art Trembanis, a marine scientist at the University of Delaware, said the team will use DOERRI to return to a Byzantine-era shipwreck in the Black Sea that Ballard and his team located last year and to search for other wrecks. "We hope DOERRI … will allow us to discover very ancient shipwrecks, previously unknown, on the Black Sea floor," Trembanis said. "Along the way, DOERRI will also give us new insights into the dynamics … that help to shape and mold the seafloor."

When the research expedition arrives on site, the team will deploy the 240-pound (109-kilogram) DOERRI submersible. The craft then will map the Black Sea's floor about 656 feet (200 meters) below the surface with sonar. DOERRI also will measure the local temperature, salt content and oxygen levels of the sea.

"At depths beyond 150 meters, the Black Sea is not unlike a giant natural bell jar from which life-supporting oxygen has been entirely removed," Trembanis said.

Immersion Presents and on the National Oceanic and Atmospheric Administration (NOAA) are funding the expedition.