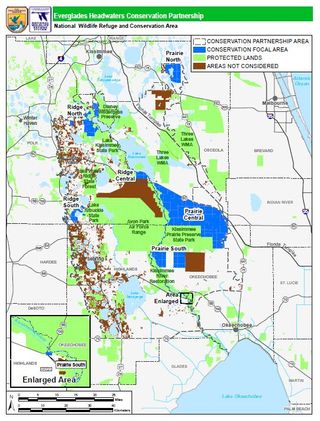 This map shows the areas identified for conservation as part of the National Wildlife Refuge and Conservation Area.
(Image: © fws.gov)

The first parcel of land has been put aside for a new wildlife refuge to protect one of the last remaining grassland and savanna landscapes in eastern North America.

Government officials accepted a donation of land in south-central Florida as part of the Everglades Headwaters National Wildlife Refuge and Conservation Area effort.

Secretary of the Interior Ken Salazar accepted the 10-acre (4-hectare) donation, which will make up the 556th unit of the National Wildlife Refuge System. The new addition to the system comes as part of the Obama administration's America’s Great Outdoors initiative.

The new refuge and conservation area will cover 150,000 acres north of Lake Okeechobee. [All Yours: 10 Least Visited National Parks]

Two-thirds of that (100,000 acres) will be held under "conservation easements" purchased from willing sellers through the U.S. Department of the Interior and the U.S. Fish and Wildlife Service. This arrangement allows private landowners to retain ownership of the land — along with the ability to continue farming or ranching there — while ensuring that the land can't be subdivided or developed.

"The extraordinary vision of our many partners will help protect significant wildlife species while supporting a way of life that is vital to our citizens," Dan Ashe, U.S. Fish and Wildlife Service director, said in a statement. "This effort will restore wetlands in the headwaters area, preserve working ranches, and support a healthy environment for central and south Florida, as well as increase opportunities to hunt, fish, hike, bird watch, and learn about the importance of this landscape."

Conservation and restoration of the headwaters area will also help improve the water quality and quantity in the Everglades, according to the Department of the Interior.

"We are inspired by the excellent conservation opportunities that exist here as a result of the efforts of our ranching community to protect working lands across generations," Ashe said.

The government officials working to establish the Everglades Headwaters National Wildlife Refuge and Conservation Area have paid special attention to working locally with landowners, conservation stakeholders, and state, tribal and local governments to preserve habitat and wildlife on working landscapes, according to the Department of the Interior.