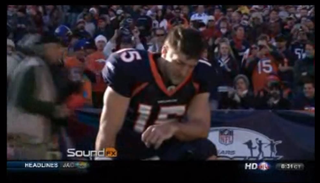 Whether or not you believe in divine intervention in sports — and a recent survey suggests that about 40 percent of Americans do — prayer may help athletes like football player Tim Tebow win on game day.

That's because praying can help focus athletes, calming them when they need to relax and pumping them up when they need energy and motivation, said Daniel Czech, a professor of exercise psychology who researches sports and spirituality. And while outsiders might question the concept of asking for divine intervention in a sporting match, Czech said athletes rarely pray for a win.

"I've never interviewed an athlete that prays for victory," Czech said. "It's more, 'God, help me accept the outcome.'"

Religion and sports go hand-in-hand in America, with prayers as a common pre-game ritual. Denver Broncos quarterback Tebow is especially vocal about his faith, starring in an anti-abortion ad put out by Christian group Focus on the Family during the 2010 Super Bowl. (Tebow's mother fell ill during her pregnancy with him but decided against an abortion.)

Tebow's tendency to pray while on the field has even triggered a national meme called "tebowing," in which people kneel in a prayerful position in odd and unusual spots.

The Broncos play the New England Patriots on Saturday (Jan. 14), and a new national poll finds that many Americans suspect that God has an interest in the outcome. According to a poll of 1,076 registered voters, weighted to be nationally representative, 43 percent of Americans who are aware of Tebow's success believe that divine intervention has played a role. Forty-two percent said it had not.

It's not surprising that Christians, at least, would assume that God involves himself in football, Czech told LiveScience.

"Stressing God and 'God will intercede' is a very important concept for many Christians," Czech said. "It's very interesting that they transfer the idea that God will intercede and divine inspiration will come to the Tebow situation."

While fans may credit divine inspiration for Tebow's success, it's very likely that the quarterback isn't praying for victory himself. According to Czech's research on Christian elite athletes, prayers fall into four common themes. One, players pray to play to the best of their ability, no matter the outcome of the game. Second, they take a "God's will" mindset, praying that God's will be done whether they win or lose. [Life's Extremes: Atheists vs. Believers]

"It's almost a passivity, if you will, of giving up control of the outcome … It's a process-oriented mindset," Czech said. That attitude may be helpful for players to relieve stress and to shore up self-confidence even in the face of loses, he said.

Players also pray to remain free from injury and to be beacons for Christianity, Czech said.

Prayer also contains a ritual aspect, Czech said, such as when a baseball player crosses himself before stepping up to the plate.

"Once they do that sign of the cross, it's almost like, 'I have protection, I have strength,'" he said.

The ritual can help players pump themselves up in a "I'm playing for Christ," way, Czech said, or it can soothe them when things get stressful.

"If you have two seconds to go, if you're in overtime like Tebow and everyone is yelling and screaming, maybe a prayer can calm you and get you back into that optimal zone," Czech said.