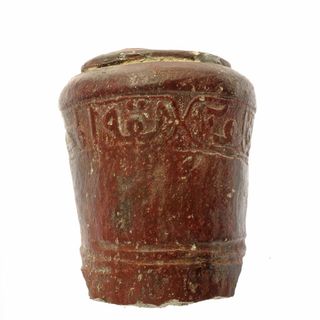 This centuries-old pipe bears an inscription that indicates it may have been a gift between lovers.
(Image: © Clara Amit, courtesy of the Israel Antiquities Authority )

An archaeological excavation in the Jewish Quarter of Jerusalem has uncovered a centuries-old clay pipe inscribed with the phrase "Love is the language for lovers."

Literally translated, the inscription reads "Heart is language for the lover." And, not surprisingly, it was most likely a gift to a lover, according to Shahar Puni, of the Israel Antiquities Authority.

"Clay pipes of this kind were very common in the Ottoman period, were mostly used for smoking tobacco, and some were even used to smoke hashish," Puni said in a statement. Hashish comes from the cannabis plant, like marijuana.

During this period, from the 16th to the 19th century, Jerusalem was part of the vast Ottoman Empire, a Turkish state that reached into Asia, Africa and Europe.

"The Ottoman authorities tried to combat this practice [smoking] but failed when it became clear that smoking was firmly entrenched in all levels of society. Pipes were also used as a piece of jewelry that could be worn on a garment, and smoking itself was popular amongst both men and women," Puni said.

Jerusalemite women are shown smoking clay pipes similar to this one in 19th-century drawings. Smoking was often done in cafes and with groups of friends, according to the Israel Antiquities Authority.