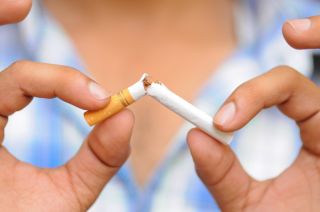 Quitters scored higher on measures of overall quality of life, health-related quality of life and positive emotions compared with those who continued to smoke, the study showed.
(Image: © Cigarette photo | shutterstock)

Smokers wary of attempting to quit may perhaps find motivation in new researchshowing that people who successfully quit smoking are more satisfied with their lives, and feel healthier than those who continue to smoke.

"Our findings suggest that, over the long-term, individuals will be happier and more satisfied with their lives if they stop smoking than if they do not," the researchers wrote. "This research provides substantial evidence that quitting smoking benefits well-being, compared to continuing smoking."

"Smokers might believe that quitting will decrease life satisfaction or quality of life — because they believe it disrupts routines, interferes with relationships, leads to a loss of smoking-related pleasure, or because cessation deprives them of a coping strategy," the study authors wrote.

But despite such concerns, the researchers found that those who quit experienced no such deterioration due to quitting.

On the contrary, quitters scored higher on measures of overall quality of life, health-related quality of life and positive emotions, both one year and three years after cessation, compared with those who continued to smoke.

Successful quitters also reported that they felt they had fewer stressors by the third year, according to the study, which was published online in the journal Annals of Behavioral Medicine on Dec. 9.

The researchers noted that their findings could be used by clinicians to educate and motivate people to stop smoking by helping them focus on the positive experiences of quitting.

Pass it on: People who successfully quit smoking report that they are more satisfied with their lives, feel healthier and experience less stressors compared to those who continue to smoke.