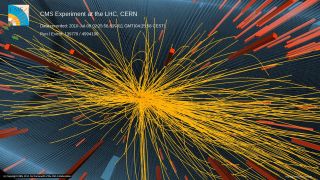 A proton-proton collision at the Large Hadron Collider particle accelerator at CERN laboratory in Geneva that produced more than 100 charged particles.
(Image: © CERN)

The world of physics is abuzz with speculation over an announcement expected tomorrow (Dec. 13) from the CERN laboratory in Geneva, home of the world's largest particle accelerator, the Large Hadron Collider (LHC).

The announcement, planned for 8 a.m. EDT (2 p.m. CET), will address the status of the search for the elusive Higgs boson particle, sometimes called the "God Particle" because of its importance to science.

This particle, which has long been theorized but never detected, is thought to give all other particles mass. Scientists at the LHC have been hoping that when protons inside the machine collide together at extremely high speeds, the energetic explosions that result will create the Higgs.

Researchers on two of the LHC's experiments, called ATLAS and CMS, will present the status of their search for the Higgs at a public seminar tomorrow.

"These results will be based on the analysis of considerably more data than those presented at the summer conferences, sufficient to make significant progress in the search for the Higgs boson, but not enough to make any conclusive statement on the existence or non-existence of the Higgs," CERN scientists said in a statement.

At that time, while the atom smasher was churning out lots of data from colliding particles, researchers had yet to see any conclusive evidence of the Higgs.

If scientists have found an indication of the Higgs, it could have far-reaching consequences in physics. It is the only particle predicted by the reigning theory of particle physics that has not yet been observed experimentally. Its discovery would help validate this theory, called the Standard Model, and fill in some of the remaining gaps in physicists' understanding of the smallest pieces of the universe.

The Large Hadron Collider, a circular ring 17 miles (27 kilometers) around that's buried beneath Switzerland, is thought to be scientists' best chance of finding the Higgs, because the explosions it creates pack more energy than anything else on Earth. This energy, when converted to mass, should be enough to produce many of the most exotic particles in nature, including the Higgs.