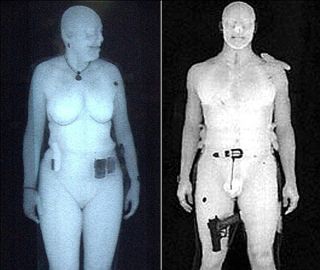 The European Union announced this week that it has banned the use of X-ray body scanners in all European airports "in order not to risk jeopardizing citizens' health and safety." Research shows that the X-ray scanners, which use low-level radiation to screen airline passengers for hidden explosives, slightly increase their risk of getting cancer.

The same scanners will continue to be used in the United States, according to the Transportation Security Administration. The TSA's stance is that the scanners meet its safety standards.

The TSA did not comment directly on the EU decision, but instead reiterated the need to use the best available security technology in U.S. airports. "Since January 2010, advanced imaging technology has detected more than 300 dangerous or illegal items on passengers in U.S. airports nationwide," spokesman Mike McCarthy told Life's Little Mysteries, a sister site to LiveScience.

It should be noted that some or most of that detection was achieved by millimeter-wave scanners, which are used more often than X-ray scanners in U.S. airports. The former advanced imaging machines use safe, "nonionizing" radiation — a low-energy kind that does not cause genetic mutations — rather than DNA-damaging X-ray radiation. [What Are X-Rays?]

About 250 X-ray scanners are currently being used in American airports, according to ProPublica, along with 264 millimeter-wave scanners. Robin Kane, the TSA's assistant administrator for security technology, explained that it is important to have both technologies in order to create competition, which keeps prices down and will ultimately lead to even better imaging technology.

According to the new decision, the 27 EU-member countries will employ only millimeter-wave scanners.

In response to earlier concerns about its adoption of X-ray screening technology, the TSA has argued that the amount of ionizing radiation used in X-ray scanners is extremely low — equivalent to the radiation a passenger would receive in only a few minutes of flying. Scientific studies have concluded that a small number of cancer cases — somewhere between six and 100, depending on the study — will result from scanning hundreds of millions of passengers per year.

That is, for every year that the X-ray scanners are used, between six and 100 people will eventually develop cancer who otherwise may not have. In the next three years, the TSA plans to install an X-ray or millimeter-wave scanner at nearly every airport security checkpoint in the country.