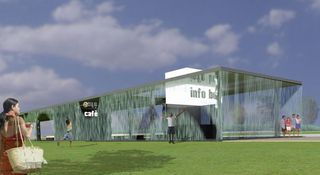 The Digital Water Pavilion will contain an exhibition area, a cafe, and public spaces.
(Image: © carlorattiassociati)

A building with waterfall walls that can display images and words is being designed by a team of architects and engineers.

The interactive "digital water pavilion," to be unveiled at the International Expo Zaragoza 2008 in Spain, will feature an exhibition area, café and various public spaces—all enclosed within curtains of recycled water.

The MIT team behind the project hopes to showcase the potential of "digital water" at the event, where the idea will be implemented in architecture for the first time. And since recycled water is sometimes cheap and plentiful, the concept of water walls could conceivably be created on a larger scale in the future.

The "digital water" effect is created by a row of valves spaced along a pipe suspended in the air. A computer controls the opening and closing of the valves, which produces a curtain of water similar to a waterfall, with gaps at specified locations. The resulting pattern of falling air and water droplets resembles the digital pixels used to create images on computer monitors and other displays.

The water curtains are also equipped with motion sensors that react to the slightest movement. "You could throw a ball at the wall, and then see an open circle drop down to meet it precisely where and when its trajectory intersected the water surface," explained William J. Mitchell, head of MIT's Design Laboratory. "and like the Red Sea for Moses, open up to allow passage through at any point."

The first international exposition took place in London in 1851. Since then, numerous expositions have been held all over the world, including the Paris Exposition of 1889, which gave birth to the Eiffel Tower.

An interactive video is available at the Digital Water Pavilion website.