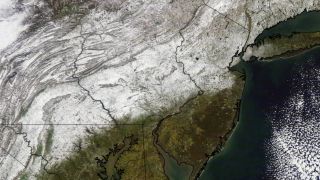 The rare October snowstorm that smacked the Northeast over the weekend shattered local records, knocked out power for millions and was blamed for the deaths of at least 10 people.

This morning (Oct. 31), 86 percent of the Northeast was covered in snow at an average depth of 4.4 inches (11 centimeters), according to the National Oceanic and Atmospheric Administration (NOAA). Because the storm hit during the fall, the wet snow piled up on leaf-filled trees and snapped branches onto power lines. About 2.5 million people were without power this morning, according to news reports.

NOAA is investigating the storm to see if it will go down as the 11th billion-dollar weather event of 2011.

A "slushy coating" of 1 to 2 inches (2.5 to 5 cm) was forecast for the big northeastern cities. New York City bested that prediction with 2.9 inches (7.4 cm) of snow over the weekend, topping its previous record of 0.9 inches (2.3 cm) for the month of October. New York City has had 65.75 inches of precipitation this year, the third most in the city's history, according to the National Weather Service (NWS). [The Snowiest Places on Earth]

As forecast, many of the hardest hit areas were inland of the big East Coast cities, with western Massachusetts hit especially hard. Peru, Mass., reported 32 inches (81 cm) of snow and 30.8 inches (78 cm) fell in Plainfield, Mass., according to the NWS. Jaffrey, N.H., reported 31.4 inches (80 cm).

Connecticut has been the worst-hit state in terms of power outages, with 800,000 homes without power, a state record, reported the Wall Street Journal. Power there may not be restored for the rest of the week.

The surface low that was causing all the snowy weather has pushed off to Newfoundland, Canada. The accumulating snow has stopped in the United States, but gusty winds are still blowing in eastern Maine, according to the NWS.