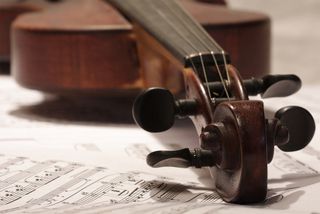 Listening to Mozart has been linked with boosted spatial reasoning, a skill that is critical to performing colonoscopies.
(Image: © Evgeny Dubinchuk | Shutterstock)

It probably wasn't what Amadeus intended. Doctors performing colonoscopies might be able to find and remove more polyps if they are listening to Mozart during the procedure. These polyps are tiny growths that can lead to colon cancer.

The study will be presented today (Oct. 31) at the American College of Gastroenterology annual meeting in Washington.

And there is indeed a logical connection here, should you be worried that these gastroenterologists next will be subjected to listening to the Beastie Boys while maneuvering their colonoscopes. The study is based on a credible theory called the Mozart effect. Mozart's music may temporarily improve a person's ability to visualize spatial patterns, a phenomenon first reported in the journal Nature in 1993.

Performing a colonoscopy entails much spatial reasoning, as doctors must carefully guide a colonoscope through the delicate large intestine with its tight turns, avoiding perforating the colon and all the while snipping and collecting any growths that seem strange. So, two researchers at University of Texas Health Science Center at Houston, Catherine Noelle O'Shea and David Wolf, decided to test the Mozart effect on two reasonably accomplished colonoscopy doctors.

The researchers first established the two doctors' baseline skill during a one-year period before the study. This is a measure of a doctor's adenoma detection rate, or the percentage of a doctor's patients in which at least one precancerous polyp is found. The two doctors had rates of about 21 percent and 27 percent, respectively.

Anything over 20 percent might be adequate to keep colon cancer at bay, according to a study published last year in the New England Journal of Medicine. Yet when these two doctors listened to Mozart while performing the colonoscopies, their adenoma detection rates rose to about 66 percent and 37 percent, respectively. This means they were finding precancerous polyps growing in many more of their patients.

These polyps can take upwards of 10 years to turn cancerous. So removing as many polyps as possible during routine colonoscopies every five or 10 years can prevent colon cancer.

Of course, there's a big "but" to this research. The study involves just two doctors each performing only a few dozen colonoscopies. Thus, the increased adenoma detection rates that the researchers observed aren't strongly statistically significant.

The Mozart effect in general has been difficult to prove. The initial study from 1993 has been grossly misinterpreted, leading to the popular notion that listening to Mozart will raise your IQ (or your baby's). In fact, the initial study points only to a temporary effect for visualizing and manipulating patterns in your head. Follow-up studies on the Mozart effect have produced mixed results, with supporting studies best labeled as intriguing, not validating.

Yet piping Mozart into the operating room is inexpensive and does no harm, two factors that support the call for further research. O'Shea said that she would like to perform a larger study on colonoscopies if she had the resources.

Coincidentally, Mozart was infamous for his scatological humor. In addition to references in his letters to excrement and the body part that produces it, Mozart composed ditties such as Leck mich im Arsch, generously translated from the German into English as Kiss My Butt.