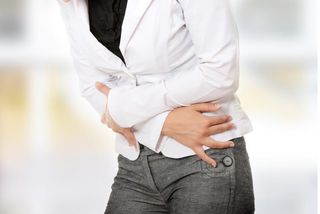 Irritable bowel syndrome (IBS) may affect up to 20 percent of American adults, though an exact cause is unknown. New research suggests psychological trauma, such as death of a loved one, may be a culprit.
(Image: © Piotr Marcinski | Shutterstock)

Stress can cause digestive issues, as anyone who has ever experienced butterflies in their stomach knows. Now, new research finds that emotional and psychological trauma can also contribute to irritable bowel syndrome (IBS), a disorder that causes abdominal pain, constipation and diarrhea.

People who have experienced more trauma over their lifetimes are more likely to experience IBS, according to the new study. This trauma can range from deaths of loved ones to divorce to disasters such as experiencing a house fire or a car accident.

"While stress has been linked to IBS, and childhood abuse has been reported to be present in up to 50 percent of patients with IBS, at a prevalence twice that of patients without IBS, most studies of abuse have focused on sexual abuse with sparse detail and also have not looked at other forms of psychological trauma," Yuri Saito-Loftus, a researcher at the Mayo Clinic in Rochester, Minn., said in a statement. "This is the first study that looks at multiple forms of trauma, the timing of those traumas, and traumas in a family setting."

Saito-Loftus reported the results Monday (Oct. 31) at the annual meeting of the American College of Gastroenterology in Washington, D.C.

The exact cause of IBS is unknown, but researchers suspect that the nerves and muscles that control the bowel are to blame. Stress may over-activate the nerves that connect the brain and the gut, leading to painful and embarrassing bowel problems. Women are 1.5 times more likely than men to be diagnosed with the condition, which may affect up to 20 percent of American adults, according to the National Institute of Diabetes and Digestive and Kidney Diseases.

Psychological trauma over the lifetime may sensitize the brain and the gut, Saito-Loftus said, making both more vulnerable to stress. She and her colleagues queried 2,623 people about the number and type of traumatic events they'd experienced in their lifetimes. Participants with IBS reported more traumas than people without the disorder.

While IBS does not ultimately harm the intestines, the disease burden is significant, with patients missing more workdays, needing more medication, and being hospitalized more frequently than the general population. The new research may help patients understand and manage their symptoms, Saito-Loftus said.

"Patients and their families frequently wonder, 'Why me? Why did this [IBS] happen?'" Saito-Loftus said. "This will help them understand why IBS happened to them, why stress continues to play a role in their IBS symptoms."