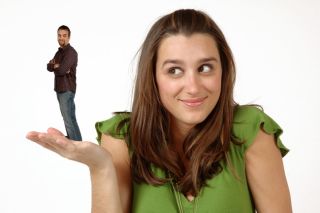 In this study, not only did women make more demands than their husbands, they also got their way more often.
(Image: © dreamstime.com)

Men might throw their weight around at the office, but at home, women are the bosses.

A study, which was just released, finds that wives have more power than their husbands in making decisions and dominating discussions.

"The study at least suggests that the marriage is a place where women can exert some power," said lead author David Vogel, a psychologist at Iowa State University (ISU). "Whether or not it's because of changing societal roles, we don't know.”

The results counter past research.

“Most of the research literature in psychology has suggested that women have less power,” Vogel told LiveScience. “They have largely based that on the fact that traditionally men earn more money and so therefore would have the ability to make big decisions in the relationship.” That wasn’t the case in this study.

Vogel, Megan Murphy, also of ISU, and their colleagues surveyed 72 married couples in which the spouses were an average of 33 years old and had been married for about seven years. Most of the participants (66 percent) were Caucasian, followed by Asian (22 percent), Hispanic (5 percent) and African American (4 percent). The final 3 percent represented “other” nationalities.

Each spouse answered questions about relationship satisfaction and overall decision-making ability. Then, each spouse noted a relationship problem that could not be resolved without the spouse’s cooperation. While money and housework were popular picks, sex didn’t come up much as a marital issue.

The scientists videotaped the couples while they discussed each of the issues for 10 minutes.

Trained volunteers coded the videotapes using a scale that rated couples’ interactions based on words and behaviors associated with blame (blames, accuses and criticizes the partner); demand (nags, pressures for change, requests); withdrawal and avoidance (avoids discussion the problem by hesitating, changing topics, diverting attention or looking away); and discussion.

Wives were more demanding—asking for changes in the relationship or in their partner—and were more likely to get their way than the husbands. This held regardless of who had chosen the issue.

The women were not just talking more than their husbands.

"It wasn't just that the women were bringing up issues that weren't being responded to, but that the men were actually going along with what they said,” Vogel explained. “[Women] were communicating more powerful messages, and men were responding to those messages by agreeing or giving in.”

One reason for in-charge wives could be that they carry the weight of making sure the family farm is running smoothly.

Wife power could signal a harmonious couple. "There's been research that suggests that's a marker of a healthy marriage—that men accept influence from their wives," Murphy said.

The study, published in the April issue of the Journal of Counseling Psychology, was funded by the National Institute of Mental Health along with ISU.