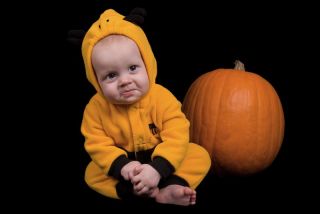 Trick or treat? Fewer babies are born on Halloween than on the surrounding days, suggesting that moms may have some control over when they go into labor.
(Image: © TRINACRIA PHOTO, Shutterstock)

"Happy Halloween" and "Happy birthday" may not be sentiments heard very often in the same breath, according to a new study. The research finds that the number of babies born drops on Halloween day, but spikes on Valentine's Day, a day with more positive associations.

Most surprisingly, the birth decrease occurred not just among moms who scheduled C-sections or induced labors; spontaneous births rose and fell along with holidays as well.

The researchers aren't sure how this holiday-birthday difference comes about, but the findings suggest that moms have some control over when they'll go into labor, said study researcher Becca Levy of the Yale University School of Public Health.

Levy and her colleagues began investigating the birth-timing question as a way to understand how personal beliefs are related to health. Some studies have suggested that the human will can triumph over the body, including in cases where terminally ill people seem to "hang on for the holidays" — though findings on whether that is the case have been mixed.

Levy chose Halloween and Valentine's Day because neither holiday is major enough to affect hospital staffing, but both holidays have strong emotional connotations: Valentine's is associated with happiness and love, while Halloween's associations are considerably darker. [Read: 13 Halloween Superstitions Explained]

The researchers used birth certificate data to look at the timing of births taking place one week before and after both Valentine's Day and Halloween from 1996 to 2006. That made for a total of more than 1.6 million births around Valentine's Day and 1.8 million births around Halloween. The researchers then compared the day-to-day differences in natural, induced and Cesarean births on the actual holiday with those on days around the holiday.

What they found was striking: On Valentine's Day, the likelihood of giving birth went up by 5 percent compared with the weeks before and after the holiday. Births from spontaneous labor spiked 3.6 percent, while induced births went up 3.4 percent. Cesarean births were 12.1 percent more likely on Valentine's, which might suggest women deliberately schedule C-sections to have Valentine's Day babies.

Halloween showed a mirror-image effect. All types of births decreased on Halloween as compared with the surrounding two weeks, the researchers reported this month in the journal Social Science & Medicine. The chance of giving birth on Halloween went down by a total of 11.3 percent, with 16.9 percent fewer C-sections, 18.7 percent fewer induced births and 5.3 percent fewer spontaneous births.

There's no way to tell whether the changes in spontaneous birth happen because mothers consciously hope against Halloween babies and dream of Valentine's-themed birthday parties, or whether the process might be unconscious, Levy said. Either way, the findings do suggest that psychological and cultural factors may be at play in the seemingly spontaneous process of labor, she said.

"We don't know the mechanisms, so that's certainly something that needs to be explored," Levy said, adding that since the study was based on birth certificates, there was no way to tell how the moms in the study felt about Halloween or Valetine's Day births.

To find out why the holidays seem to influence birth timing, the researchers would need to conduct a much smaller study on expecting mothers, monitoring their hormone levels and feelings about certain potential birth days, Levy said.