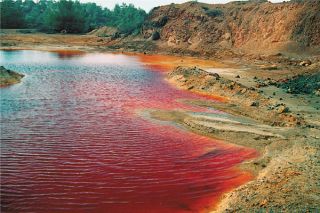 The first oxygen-dependent life on land may have been bacteria that "eat" pyrite, also known as fool's gold. Similar bacteria still exist at mining waste sites, where pyrite has been discarded creating highly acidic conditions. Above, a modern-day acidic drainage at an abandoned copper mine.
(Image: © Courtesy of Kurt Konhauser)

A spike in the chromium contained in ancient rock deposits, laid down nearly 2.5 billion years ago, reveals what appears to be the earliest evidence for oxygen-breathing life on land.

The transformation known as the Great Oxidation Event occurred when the atmosphere gained oxygen, an element crucial for nearly all animal life, including humans. The new analysis indicates the earliest estimate to date for the start of the Great Oxidation Event — 2.48 billion years ago. Other research has suggested small amounts of the gas appeared in the oceans and possibly the atmosphere around 2.5 billion years ago.

For this study, the researchers performed more than 2,000 analyses on samples from more than 100 rock formations, including those called banded iron formations, located around the world, from Canada to South Africa.

Life did exist at the point when chromium levels increased, but it was simple; single cells had yet to come together and begin cooperating as multicellular life forms.

Scientists believe microbes called cyanobacteria living in the ocean kick-started the transformation when they began to photosynthesize. Oxygen, a byproduct of photosynthesis, accumulated in the ocean, then percolated into the atmosphere. Now, oxygen accounts for 21 percent of the air we breathe, and humans need it to survive.

Although the rocks were formed under the oceans, on submerged continental shelves, they accumulated metals, including chromium, which had washed off the continents by rivers and groundwater. The researchers looked at chromium because it is very difficult to dissolve, according to lead researcher Kurt Konhauser, a geomicrobiologist at the University of Alberta.

Before it arrived in what would become these rock deposits, traces of chromium were tied up in other compounds within rocks on land, including pyrite, a shiny gold mineral known as fool's gold. For millions of years, the chromium remained bound up; then about 2.48 billion years ago, something began releasing it into the oceans.[Photos: World's Most Famous Rocks]

That something was a powerful acid, created by a chemical reaction with pyrite, Konhauser said. And in order to get the pH — a measure of acidity — low enough to explain the presence of chromium, sulfuric acid must have been present, he said.

This sulfuric acid must have come from the pyrite at the hands, if you will, of bacteria. These bacteria —  similar species still exist — would have used oxygen taken from the atmosphere to perform an energy-releasing chemical reaction. In essence, the bacteria "eat" the pyrite.

Pyrite contains sulfur, and this reaction forms sulfuric acid. So, Konhauser and colleagues think that the sulfuric acid dissolved the chromium, which made its way to the oceans.

Modern versions of these bacteria are known to live off pyrite discarded by the mining industry, creating highly acidic conditions in water that collects around these waste sites.

Konhauser said he is not aware of any prior work highlighting this milestone in the history of life. "We are the first to explicitly talk about the origin of these organisms on land," he said.

The study was published in the Oct. 20 issue of the journal Nature.