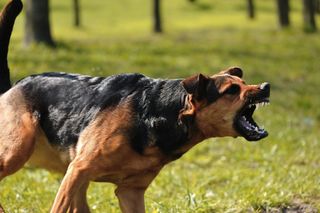 Dogs are responsible for almost all of the rabies cases transmitted to humans worldwide. Vaccinating pets has nearly solved the problem of human rabies in the U.S., but the disease still threatens in the developing world.
(Image: © Art_man, Shutterstock)

A 28-year-old woman in India came to her doctor with an unusual complaint: a sudden and persistent increase in her sex drive. She felt constantly aroused, often with no stimulation at all.

Unable to find an explanation, the woman's physician and gynecologist referred her to the department of emergency medicine at the Sri Gokulam Hospital and Research Institute in Salem, Tamil Nadu. Four days later, she was dead.

What disease could take a woman from distressing sexual symptoms to death in less than a week? The answer is a virus that has been nearly eradicated in humans in the U.S. but remains a scourge in the developing world: rabies.

Famous more for the symptomatic fear of water (actually a sign that the virus has paralyzed the swallowing muscles), rabies sometimes first shows up as unexplained hypersexuality, caused by the virus inflaming the brain. Unfortunately, by the time this symptom shows up, the disease is incurable. [Hypersex to Hoarding: 7 New Psychological Disorders]

In the case of the Indian woman, a small bite from a puppy two months earlier caused the disease, researchers reported online in June in the journal Archives of Sexual Behavior.

"Often people will say, 'Well, if I have any symptoms I'll go to the doctor,'" said Peter Costa, the communications director for the Global Alliance for Rabies Control. But by then, Costa told LiveScience, it's too late.

"If you've been bitten or suspect you've been licked or scratched by an infected animal, you should seek treatment within 24 hours," said Costa, who was not involved in the Indian woman's case.

Pet vaccination programs in the United States have been so successful at staving off rabies that Americans rarely think of the disease as a problem anymore, Costa said. But around the world, between 55,000 and 70,000 people die of rabies each year, he said. That's someone every eight minutes.

Most of the deaths are in children under age 15 and in regions where public health resources and preventive treatment such as vaccinations are lacking. Rabies-related human deaths in the U.S. have dropped from 100 a year at the turn of the century to one or two per year in the 1990s, according to the Centers for Disease Control and Prevention.

The No. 1 culprit for transmitting the disease is Fido.

"The dog is responsible for more than 99 percent of human rabies cases," Costa said.

In many cases in the developing world, he said, the dogs aren't family pets but strays or semi-strays that hang around communities.

Rabies at the gate

The Global Alliance for Rabies Control focuses on promoting vaccination for domesticated and semi-domesticated animals, including semi-feral dogs. When 70 percent of dogs in a country are vaccinated, Costa said, cases of human rabies plummet.

But to halt rabies' spread, education is also a key, Costa said. The Indian woman did not seek medical attention after her dog bite, because the bite was small and the dog just a puppy. But early treatment could have saved her life.

"If you've been bitten, wash the wound with soap and water for about 10 minutes and then seek appropriate medical treatment," Costa advised. If doctors determine that the bite put you at risk for rabies, they'll inject antibodies that fight rabies right around the wound. Then patients get four vaccinations over two weeks. These vaccinations used to be given in the stomach, but rest easy: They're now given in the arm like an ordinary shot.

"It's not nearly as painful as the horror stories of the abdomen shot," Costa said.

Cases like the Indian woman's are also a reminder of why mandatory vaccines for pets are so important, Costa said.

"The public health system in the United States and Europe has done just a tremendous job, to the point where I think people forget why we vaccinate our animals," he said. "Rabies is just outside the front door."