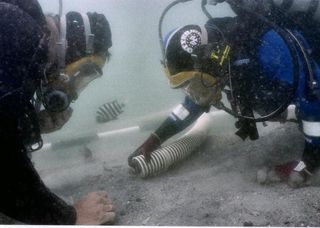 Divers work with a hose that sucks up small artifacts near Blackbeard's ship to the recovery vessel.
(Image: © Steve WorkmanNC Department of Cultural Resources.)

Diving archaeologists are in the midst of a monthlong expedition to the sunken wreckage of the pirate Blackbeard's ship, the Queen Anne's Revenge, off the North Carolina coast, but the weather is not cooperating.

"Mother Nature is keeping us away from the site at least for most of this week," said mission leader Mark Wilde-Ramsing of the North Carolina Office of State Archaeology. "We'll do what we can; we still expect to raise a cannon."

The Queen Anne's Revenge sank off the coast of North Carolina in 1718 when Blackbeard (Edward Teach ) ran it into the ground while entering an inlet.

Hurricanes have scoured the remains of the ship over the years, and the wreckage was in bad shape in 2006 before the U.S. Army Corps of Engineers built sand berms (small piles of sand) to buffer the wreckage from the gusty winds and ocean swells. Earlier this year, Hurricane Irene socked the North Carolina coast, not far from the wreckage, but the ship's remains seem to have held up well, Wilde-Ramsing told OurAmazingPlanet.

Using the North Carolina Marine Fisheries' Research Vessel Shell Point as the principal recovery vessel, the team began their work on Oct. 3. Once the bad weather passes, they plan to continue the excavation, documentation and recovery of artifacts. Unfortunately for the team, the current bad weather blew sand back into areas that the archaeologists dug out last week. [In Images: Divers Explore Blackbeard's Ship]

The team has already found what may be a shackle for a leg iron that held captives or enslaved Africans (the French ship was called Le Concorde when it was a slave trading ship). The team also found a small brass lid that fits on top of nesting weights. Nesting weights were used as counterbalances to weigh medicine or other powder onboard the ship. Archaeologists have discovered a nearly complete set of the nesting weights, minus the lids, at the site.

One of the largest of the ship's 40 guns, cannon C23, is the real prize of the mission. The cannon is surrounded by a kettle, wooden deadeyes, a pewter plate, cannonballs and a number of unidentified objects, so much work remains to bring the cannon to the surface.

The team has made good progress on their work around a smaller cannon, C13, Wilde-Ramsing said. If, for some reason, the team isn't able to bring C23 ashore, they'll remove C13 instead.

"It's always a good show," Wilde-Ramsing said. "It's neat to think who was the last to touch it or the last to fire it."