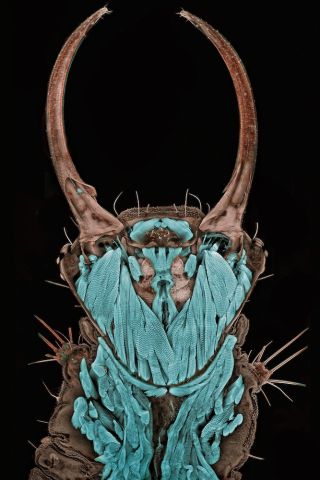 A photo of a tiny teal insect larva with horn-like jaws took top spot at an annual photography competition that focuses on the itsy-bitsy things in life.

The winners of the 2011 Nikon International Small World photography contest were announced Tuesday (Oct. 4), with the winning photograph of a green lacewing larva taken by Igor Siwanowicz of the Max Planck Institute of Neurobiology in Germany. Second prize was an ultra-close look at a blade of grass by Donna Stolz of the University of Pittsburgh. [See a gallery of the winners]

A bit of the algae Melosira moniliformis took third place for its photographer, Frank Fox of Fachhochschule Trier in Germany.

The winning image was the result of a bit of luck for Siwanowicz. The tiny lacewing actually bit the researcher. Instead of swatting it, Siwanowicz plucked the bug off his skin and dropped it into a test tube to photograph later.

"My art causes a dissonance for its viewer — a conflict between the culturally imprinted perception of an insect as something repulsive and ugly with a newly acquired admiration of the beauty of its form," said Siwanowicz, who completed his doctoral studies in protein crystallography but now works in invertebrate photography for research. "My hope is that in some way, my photomicrographs prompt people to realize the presence of cultural programming, question it, and eventually throw it off as an illusion."

Nikon first launched the Small World Competition in 1974. Scientists and photographers of all disciplines enter pictures taken through the microscope called photomicrographs, and a panel of judges picks the top 20, plus honorable mentions, each year.

Award winners this year spanned the gamut from a close-up look at a microchip in neon colors to a delicate black-and-white photograph of a quaking aspen leaf. Gabriel Luna of the University of California, Santa Barbara, won seventh place with a purple-and-red image of mouse nerve fibers. Douglas Moore of the University of Wisconsin won 20th place for his photograph of glassy dinosaur bone cells.

While the panel of judges has had their say, the public still has a chance to pick their favorite photographs. The Small World popular vote contest is open until Oct. 30.