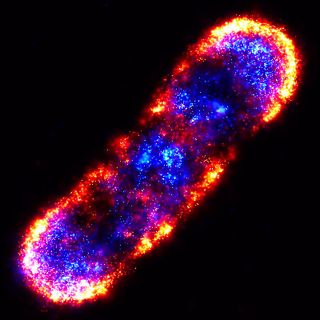 Bacteria have very good organizational skills — so good that they actually get more orderly when they're put in small, crowded environments.

In this computer simulation, a few E. coli bacteria (blue rods) start out perpendicular to the walls of their square container. As the bacteria multiply and the space gets more crowded, they orient themselves into tidy columns (red rods) parallel to the container walls. The perfectly choreographed routine finishes with a flourish when the model bacterial community is pure red.

Bioengineer Jeff Hasty and physicist Lev Tsimring, both of the University of California, San Diego, put together this color-coded computer model to figure out how crowds of cells behave and communicate. The researchers wanted to know how a different density of cells in a given space affects organization. They found that the rod-like E. coli bacteria put themselves into a remarkably organized arrangement as the crowd expanded. In other words, this growing microbial metropolis progressed from disorder to a more ordered state.

Bacteria cluster into communities for the same reason humans do: it offers protection from hazards, in this case antibiotics. As Tsimring puts it, "when environmental conditions are harsh, bacteria like to stick together."

Learning the specifics of how bacterial cells organize themselves when they multiply is helping scientists better understand biofilms, dense sheet-like colonies of bacteria. Biofilms are the most common way bacteria organize themselves in nature. They're found on living tissues and on the surface of rocks, as well as on moist man-made objects like kitchen drains and hospital tubing.

Most biofilms are harmless to humans, but some are associated with tooth decay and infections of the lungs, ears and urinary tract. For these health problems and others, understanding how bacteria cluster and crowd could offer new insight into how to beat them.

Any opinions, findings, and conclusions or recommendations expressed in this material are those of the author and do not necessarily reflect the views of the National Science Foundation. See the Research in Action archive