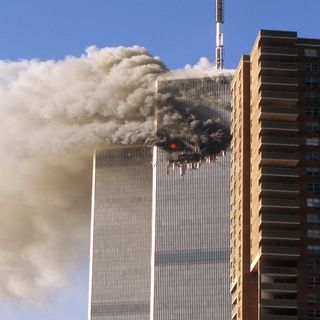 The attacks of September 11, 2001, were a shocking and emotionally raw event that most adults, especially in the U.S., still have trouble comprehending. For children under 14, however, the events of that day are but a page of history, a modern-day Pearl Harbor.

Now, with the 10th anniversary of these attacks upon us, psychologists, educators and parents are thinking again about how best to teach children about the traumatic day and its aftermath — as well as the complicated threat of terrorism.

"It's such an unprecedentedly scary event of unimaginable proportions," says Joan Brodsky Schur of the Bank Street College of Education in New York City, who was living and teaching at the Village Community School in Manhattan the day of the attacks. After the attacks, there was a rush of resources and research throughout the U.S. to help adults make sure kids were coping.

But with that first generation now in high school, college or beyond, priorities have changed. As media coverage of the anniversary ramps up and discussions of terrorism, national security and wars resurface, many adults will try to explain the event to kids of all ages. Advances in child psychology and educational research are helping adults these days to better fine-tune their message to meet children's developmental level — which is not only crucial in helping children understand what happened, but also for handling fears and anxieties that are likely to arise. Previous efforts were often one-size-fits-all, regardless of age.

And to ensure that kids feel secure in the face of renewed discussion of terrorism and its potential horrors, researchers have turned a close eye onto the ways in which kids understand — and often misunderstand — the media and historical events.

A kindergarten classroom might not seem like the most natural place to have a discussion about 9/11. But it is likely a necessity. The events of that day likely have cropped up in recent media coverage that children of all ages are exposed to, even if they lack a personal reference point.

That does not mean, however, that they cannot still be deeply affected by such coverage. In an analogous situation that Brodsky Schur recounts, during a field trip to a cathedral earlier this year, an eight-year-old boy looked worried and asked what happens when a person dies. She later checked in with the boy's homeroom teacher to see if something in his home life might have prompted the question. She discovered, rather, that his concern had been sparked by media coverage of the religious fringe group that had been promoting May 21 as judgment day and the end of the world. A seemingly frivolous news story that was easily dismissed by adults surrounding them had, according to the teacher, actually affected many children in the class.

Unlike the worried boy on the field trip, not all children verbalize their fears to adults, leaving misapprehensions — and acute apprehensions — unaddressed. So studying the perspective of children when they are playing freely can be a good way to gather clues about what they are thinking and how they are feeling about complicated topics. "Watching the kids' play may pick up that they have some fears of misunderstandings that you might want to deal with," says Judy Myers-Walls, a professor of child development and family studies at Purdue University in Indiana.

"It's a scary topic, and young children particularly don't understand what they're seeing on TV," Brodsky Schur says. Even now, 10 years later, seeing footage of the Twin Towers in flames or the wreckage at the Pentagon, children might wonder: "Is this happening now? All over again?" she says.

As Myers-Walls explains, "it's important to talk about media and how media works so that children can begin to get a sense of how to separate things — and begin to understand what they're watching." Even by age nine, some kids might not have a firm grasp how television and online video work. In child psychology researchers often use one simple question to assess how well a child understands video: "Where does Sponge Bob [or another favorite fictional character] go when you turn off the TV?" If a child says that he goes to his home under the ocean, it is clear that they are still sorting out the boundaries of the medium, Myers-Walls says. "But if they say, 'Well, he's just a drawing,' then they get it."

Research has shown that trying to understand actual, factual chronology can also confuse young children. "Kids tend to run a lot of historical events together," Myers-Walls says. "When children have drawn pictures of war for me, they will end up combining swords and shields with bombs and guns — they'll put horses with airplanes."

Such mashup drawings can be an important starting point for working with elementary- and preschool-age kids. "What it does is it gets them thinking, and even if you don't recognize what they're trying to draw, the kids can tell you," Myers-Walls says. And from there, adults can step in to steer the conversation to address their misunderstandings or concerns.

But when it comes to deciding how to actively teach kids about September 11th, their age and cognitive level are obvious factors. For younger children, stories of individuals can be a great way to communicate abstract concepts or historical time periods. But, Brodsky Schur says, in the case of 9/11, it is probably not a good idea to discuss "stories from the personal perspective of what people suffered. I think that's a tricky angle from a psychological perspective." To get down to the finer details of the events, it is likely best to wait "until children are able to read about it on their own and be able to evaluate the sources of what they're reading — who's telling them and from what perspective," she says. That cognitive and pedagogical leap usually occurs around the fourth and fifth grade.

After that advance occurs, work with children has shown that they start to take a keener interest in actively gathering information. Turned loose online, however, kids might become overwhelmed with accounts and reflections of all types. So it is important, Myers-Walls says, for children at this stage to have a little guidance from adults, who can help them learn ways to look for information and to assess its source. Additionally, she notes, "It gives you a chance to discuss some things as they come up," she says.

Once full adolescence hits, kids often prefer to focus on the abstract ideas, emotions and causes and effects surrounding events. At this age, "they may say some rather outlandish things," Myers-Walls notes, adding that it's okay to let them explore ideas and operate in the realm of the hypothetical.

This developmental step also means that, "as they grow older, children are more frightened by portrayals of abstract concepts," noted Nancy Eisenberg of Arizona State University in Tempe and Roxane Cohen Silver of the University of California, Irvine, in a paper published in the September issue of American Psychologist. "By adolescence, youths' mental abilities to grasp concepts of geographical space and contrary-to-fact propositions might allow them to understand the full magnitude of the 9/11 attacks and imagine the possibilities of future attacks," they noted.

A chance to rebuild

With all of the violence and fear wrapped up in 9/11 and the events and threats it has spawned, it is a particular subject to frame for kids. "I think you need to be careful with young children," Brodsky Schur says, highlighting ages five to eight as particularly delicate years — when children register just enough information to be afraid but often lack the deeper knowledge and coping skills to put their reactions into context. She notes it is okay to acknowledge that a horrible event occurred, but "there's a lot about resiliency" to be highlighted, about "people helping one another and rescue efforts" that highlight the positive things that happened in the wake of the attacks, she says.

Age-appropriate play can be particularly useful for putting this message into action, Myers-Walls explains. "If they're concerned about things, what play allows you to do is redo things," she says. If a child is building towers of blocks and knocking them down with planes, it gives adults a chance to refocus energy on the act of rebuilding the towers—and how cooperation can facilitate the process. Stuffed animals, dolls and other toys, likewise, are often how preschool- and elementary-age kids relate stories they have heard. "That is a way children learn to understand things and process them," Myers-Walls says. And as with the blocks, these times of play can be opportunities for adults to join in, highlighting positive alternatives and gently revising misapprehensions of events or concepts. Like much of learning, research has shown that this sort of play is part of "a gradual building of their attitudes and their impressions that will come from multiple interactions," Myers-Walls says.

Recent curriculum work has shown that for older children, the events of and following September 11th can be productively put into historical contexts that highlight examples of resiliency and cooperation, such as the American Revolution or the Great Depression. The complex event and its aftermath can also be further illuminated via discussions of larger themes in social and political history, such as balancing national safety and civil rights — comparing reactions to 9/11 with those following the attack on Pearl Harbor, for example — or the grounds for overseas military interventions — such as the recent U.S. engagements in Iraq and Afghanistan as compared with the U.S.'s position on the League of Nations after World War I. "These themes put a light on it," Brodsky Schur says, giving teachers and even parents a way to integrate such a seemingly unteachable event.

But before adults attempt to teach children about 9/11, it is crucial for them to examine how they themselves feel about it, Myers-Walls notes. Especially if the anniversary is going to be a tough time emotionally for adults, she says, "they need to get themselves together before they deal with the kids. I think it's okay to show emotions," she notes. "But you don't want them to feel like you're out of control — you're the emotional base for your kids."

And although the September 11th attacks — and the events they precipitated — might have been life-altering in many ways for adults, for many kids, they simply might not be worth dwelling on, anniversary or not. For children of military families or those who lost relatives in the attacks, the event is naturally going to have much more of a personal impact and might require closer emotional monitoring. As Myers-Walls notes, however, "most kids, I think, are going to say, 'That's interesting, but I'm going to go play.'"