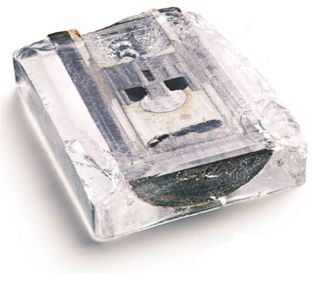 Led by MIT professor Donald Sadoway, researchers are developing a new type of battery, shown above, that under operating conditions, uses all liquid interior components. The design could potentially slash the costs of electrical energy storage.

The technology's development, funded in part by a $6.9 million grant from the Department of Energy's Advanced Research Projects Agency — Energy, is being researched in Sadoway's lab and commercialized by an MIT spin-off company, Liquid Metal Battery Corporation.

The liquid metal battery will have all the components of a traditional battery, except each of the standard components will be liquids that maintain temperatures that are several hundred degrees Celsius.

The liquid metal battery's advantages over other grid-scale storage solutions relates largely to its costs. It has all of the positive attributes of a typical battery (such as lithium-ion or sodium-sulfur batteries) at a small fraction of the expense.

The three-layered battery uses relatively affordable metals and molten salts, and has the potential to efficiently store vast amounts of electrical energy. In the initial design, each unit operates at 700 degrees Celsius and consists of a lower layer of high-density liquid antimony (the positively charged cathode); a middle layer consisting of an electrolyte (the molten-salt solvent); and an upper layer of less-dense liquid magnesium (the negatively charged anode).

For a rainy day

Because of their design, liquid metal battery cells can be scaled to larger sizes that will provide storage capacities sufficient to manage the intermittency of solar and wind based power generation (in which the amount of energy produced can vary). Specifically, when solar or wind production methods produce more energy than is needed, the excess can be stored in the battery for release when sunlight is lacking or winds are less active. This ability to scale easily is seen to be crucial, since cost is the key limitation of battery deployment at grid scale.

The electrodes of a liquid metal battery won't suffer stresses or cracks because its active components are liquids, and the team believes that devices should last for at least ten to fifteen years (possibly multiple decades) regardless of the number of cycles the battery goes through, a problem which traditional batteries have.

The Liquid Metal Battery Corporation hopes to cut the price of electrical energy storage as a result of the technology's inherently low scaling and material costs — potentially bringing the capital costs of storage down to about $100 per kilowatt-hour, a cost significantly lower than the price today.