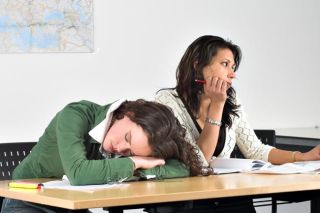 Bullying isn't good for any child's academic achievement. But a new study finds that high-achieving black and Latino students are academically harmed the most when they fall victim to bullying.

Students who reported being bullied in the 10th grade saw a drop in their grades in 12th grade compared with their pre-bullying 9th-grade scores, according to research presented today (Aug. 23) at the annual meeting of the American Sociological Association in Las Vegas. The drop is sharpest for high-scoring black and Latino students, said study author Lisa Williams, a graduate student at Ohio State University. That may be because these high achievers don't fit their communities' racial stereotypes.

Williams used nationally representative data from the Education Longitudinal Study of 2002 to conduct the study, pulling grade point average (GPA) data for 9,590 students in 580 schools across the country. Of those, 5,610 were white, 1, 360 were black, 1,470 were Latino and 1,150 were Asian.

Across the board, experiencing bullying in the 10th grade coincided with a drop in GPA in the 12th grade. Students who reported in the survey that they were bullied saw a 0.49-point decrease (out of a possible 4.0 points) in GPA compared with students who weren't bullied. The results match those of another study released earlier in August that found that schools with high rates of bullying have lower standardized testing scores.

The effects were starkest when looking at academically talented minority students. An African-American student with a 3.5 GPA (out of a potential 4.0) in 9th grade who was bullied lost, on average, 0.3 GPA points by 12th grade. For a white student with a 3.5 GPA, that same number was only 0.03 points, 10 times less severe.

Victimized high-achieving Latino students fared even worse, losing 0.5 GPA points on average in 12th grade as a result of bullying.

Low-achieving Latino and black students' GPAs were not as affected by bullying, dropping less than 0.1 GPA points. Low-achieving whites were more affected than high-achievers, losing just over 0.1 points. For Asian students, being high- or low-achieving made no difference in the amount of GPA lost: Bullying in 10th grade translated to about a 0.3-point drop in GPA across the board.

The study can't distinguish between ongoing bullying and more limited victimization, Williams reported, but she suspects based on workplace bullying research that racial stereotypes are at the root of the high-achieving minorities' woes. According to stereotype, blacks and Latinos do worse in school, she said, so those students might be picked on for failing to conform.