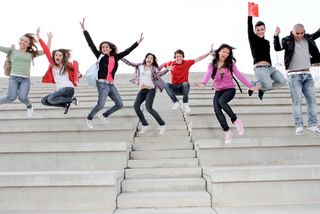 Childhood obesity and drug abuse tied for first place as a major concern on the 2011 Children's Health issues report, with sexting making the list for the first time.
(Image: © Godfer | dreamstime)

Drug abuse and childhood obesity ranked highest on a new survey of health concerns for children.

Both of those health issues were rated as a "big problem" by 33 percent of adults surveyed.

The survey results also revealed that 25 percent of adults rated smoking as a big problem for children's health, and 24 percent rated teen pregnancy as such. "Sexting" — the practice of sending or receiving sexually explicit text messages or photos via cellphone — made the list for the first time, coming at No.10 with 20 percent.

"The perception of drug abuse as a big problem matches recent national data showing increasing use of marijuana and other drugs by U.S. teens," Dr. Matthew Davis, a pediatrician at the University of Michigan and director of the National Poll on Children's Health, said in a statement.

The fifth annual survey of the top 10 health concerns for kids also included alcohol abuse, as well as stress and bullying. The poll, which was conducted by the University of Michigan C.S. Mott Children's Hospital, asked a randomly selected group of adults that closely resembled the U.S. population to rate 23 different health concerns for children living in their communities.

The results reflect concerns regarding the risks associated with children's use of technology, with Internet safety coming in sixth place and sexting  making its first appearance on the list.

The risk of driving accidents, which was absent from the 2010 list, came in at No. 9 this year.

Compared with last year's survey, teen pregnancy jumped from seventh place to fourth. Stress, however, slipped down from No. 5 to No. 7. The risk of child abuse and neglect was No. 8 in 2010, but was absent from this year's top 10.

Davis said that although obesity tied for first place, the general public still needs to become more aware of the issue. For example, the survey option "not enough opportunities for physical activity" came in ninthplace on last year's list, but did not make this year's list at all.

"Although obesity remains atop the list of child health concerns for the fourth straight year, the level of public concern has declined over the last few years in our poll," Davis said. "This may be a warning to public health officials, because it indicates how the public is hearing national messages that previous increases in children's obesity rates have recently leveled off."

Pass it on: Childhood obesity, drug abuse tied for first place on the 2011 Children's Health issues report, with sexting making the list for the first time.