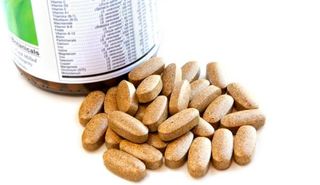 Smokers who take a multivitamin smoke more and experience a higher boost in perceived invulnerability than those who don't pop the pills, a new study shows.
(Image: © Sonbeam | Dreamstime)

Taking vitamins gives smokers a false sense of safety when it comes to their health, a new study shows.

Smokers who took multivitamins believed they were reducing their risk of cancer, and therefore allowed themselves to smoke more, the study said.

"Smokers who take dietary supplements can fool themselves into thinking they are protected against cancer and other diseases," lead author Wen-Bin Chiou, of the National Sun Yat-Sen University in Taiwan, said in a statement.

But smokers are mistaken in believing that vitamins will negate the health risks that smoking brings, and there is no evidence that multivitamins  protect against cancer, the study said.

The study was published today (Aug. 2) in the journal Addiction.

Researchers performed two separate experiments on a total of 154 daily smokers. In the first experiment, 74 smokers were given a placebo. Half were told that it was a sugar pill, while the other half were told they were taking a vitamin C supplement.

All of the smokers were then asked to fill out an hourlong, unrelated survey during which they were permitted to smoke. Those who thought they had taken a vitamin C pill smoked almost twice as much as those who knew that they had taken a placebo. The vitamin C group also reported greater feelings of invulnerability.

The second experiment was done on a new group of 80 daily smokers. Half of the group was informed that they were taking a multivitamin pill, while the other half was made aware that it was a placebo. This time, the one-hour survey also contained questions regarding their attitude toward multivitamins. Like the first experiment, the smokers who thought they had taken a vitamin smoked more than the control group.

The second experiment's results also showed that those who thought they were taking a multivitamin smoked more, had a more positive attitude toward multivitamins and experienced a higher boost in perceived invulnerability.

Further, the study showed that among smokers who thought that they had taken a multivitamin, the amount that a participant later smoked rose if the smoker expressed a conscious belief that multivitamins increase health.

Psychologists refer to this as an example of the licensing effect, which occurs when people assume that making a good choice allows them to make a poor choice later on. For example, a person may feel that because they didn't drink alcohol during the workweek, they've earned the right to a weekend binge.

"Reminding health-conscious smokers that multivitamins don't prevent cancer may help them control their smoking or even encourage them to stop," Chiou said.