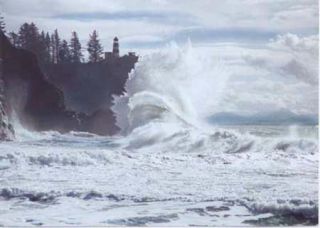 Video footage obtained from the waters off the coast of Alaska in 2009 contains what some claim is strong evidence of a sea serpent. It was examined by brothers Johnathan and Andy Hillstrand, captains of a fishing boat featured on the television show "Deadliest Catch," who then decided to hunt the beast.

The Hillstrands were searching for a regional sea serpent called Caddy that supposedly dwells in the cold waters along the coast of British Columbia. Some people believe the beast to be a relic of the dinosaur age, and that it possesses a head like a sheep, a horse or a camel, with large, front-facing eyes and possibly small ears or horns. [Watch the video. "Caddy" appears at the 0:35 mark.]

Caddy (or Cadborosaurus willsi, as two scientists somewhat prematurely christened it) was named after British Columbia's Cadboro Bay, where the animal has been repeatedly reported. The sea serpent was made famous in the 1930s through a series of popular newspaper articles. One man even claimed to have captured an infant Caddy in 1967, describing it as a 16-inch scaly eel-like animal with two flippers and a flipper-like tail. The man, William Hagelund, put the diminutive monster in a bucket of water to transport it to scientists for examination the following day.

Unfortunately, the world of science lost its chance to study the world's first captured sea serpent (if that's indeed what it was) when Hagelund inexplicably decided to throw it back into the ocean. Hagelund apparently didn't think to photograph it before he set it free, thus assuring that no evidence of the incident remains. [Mythical Beasts: Creatures That Don't Exist (Or Do They?)]

As part of an upcoming one-time television special, "Hillstranded," the Hillstrands returned to the locations of several Caddy sightings to look for the beasts (though presumably the monsters, if they indeed exist, have moved around a bit in the years since they were first sighted).

In assessing the sightings, Andy Hillstrand stated that it's unlikely that ordinary animals would be mistaken for sea serpents or unknown monsters because many of Caddy's eyewitnesses are seasoned fishermen "who are familiar with the local marine life" and can easily identify animals by their appearance and behavior. [El Chupacabra Mystery Solved: Case of Mistaken Identity]

The pair claimed to have chased a long, white animal that sprayed water out of its head. Andy Hillstrand said that what they saw was definitely not a shark, though "a giant eel may be possible" — a puzzling statement coming from an experienced fisherman, because eels (unlike whales and other cetaceans) cannot spray water out of their heads.

Perhaps it was instead a splash of water instead of a spray; if so, it could have been any number of fish. It's not uncommon that common marine animals are mistaken for mysterious sea beasts. Earlier this summer, a sturgeon was mistaken for a mutant sea monster in New York City. And in China, a Bryde's whale was pegged as a sea monster.

In a teaser video, a voiceover says, "It looks just like the Loch Ness monster," though that's not quite accurate. In fact, depictions and eyewitness descriptions of the monster claimed to inhabit Scotland's most famous loch vary widely. There's no singular agreed-upon description: some say it looks like a log, a dog, or a horse, with varying lengths and numbers of humps described.

In paranormal expert George Eberhart's book "Mysterious Creatures: A Guide to Cryptozoology," he writes that, "The most common descriptions mention a large, rounded object like an overturned boat; several humps in a line; or a long neck and a hump... the color is grey, dark grey, or black; occasionally a sandy or light brown color is reported. Small, flat head that blends into the neck. Two horn-like protrusions on the top of the head."

Unfortunately, most of these characteristics have two things in common: 1) they appeared in photographs and films that have since been proven hoaxes (or mistakes); or 2) they are features that are shared with many normal creatures in lakes, including wakes, waves, and large fish.

The 2009 sea serpent video is (predictably) dark and out of focus. In truth, it doesn't look like Caddy, nor Nessie, nor really much of anything except two segments of unknown length that might be a wave. Or an unknown sea serpent. Or part of a known animal. Or really pretty much anything else. If sea serpents really are out there, it seems the world will have to wait for better evidence.

Benjamin Radford is deputy editor of Skeptical Inquirer science magazine and co-author of Lake Monster Mysteries: Investigating the World's Most Elusive Creatures. His website is www.BenjaminRadford.com.