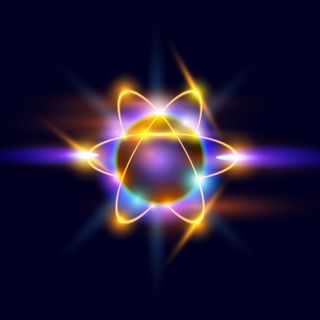 An atom consists of a nucleus of protons and neutrons, with electrons orbiting around.
(Image: © Dreamstime)

The mind-bending laws of quantum mechanics say we can't observe the smallest particles without affecting them. Physicists have now caused the smallest-ever disturbance while making a quantum measurement — in fact, almost the minimum thought to be possible.

This disturbance is called back-action, and it is one of the hallmarks of quantum mechanics, which governs the actions of the very small. It arises from the supposition that before a measurement is made, particles exist in a sort of limbo state, being neither here nor there while retaining the possibility of either.

Once an observer intervenes, the particle is forced to "choose" a state ? to settle on one possibility, eliminating the other options. Thus, the state of the particle is altered by the act of measuring it.

"The atom changes because you are looking," explained physicist Peter Maunz of Duke University. [The Coolest Little Particles in Nature]

Usually the small difference caused by this back-action is dwarfed by the interference to particles caused by laboratory imperfections. But for the first time, scientists have achieved a quantum measurement with virtually no additional disturbance beyond what quantum mechanics deems unavoidable.

The researchers, led by Jurgen Volz of the Université Pierre et Marie Curie in Paris, reported their findings in the July 14 issue of the journal Nature.

"I think it was a significant step forward," said Maunz, who did not participate in the new research but wrote an accompanying essay in the same issue of Nature. [Twisted Physics: 7 Mind-Blowing Findings]

In the new experiment, Volz and colleagues trapped a single atom of rubidium in a cavity between two mirrors. They then shined laser light on the trapped atom. What happened next depended on which of two energy states the atom was in. In one state, the atom would "ignore" the light, which would bounce back and forth between the mirrors and eventually leak to a detector beyond the mirrors.

In the second state, the atom would absorb and re-emit the light photons in a process called scattering. Scattering changes the energy of the atom, and the researchers wanted to prevent that effect; the only disturbance they wanted was from the effect of their observation.

In either case, the state of the atom could be determined without causing the scattering effect.

"Experiments done before used atoms in free space and shined a laser beam on them," Maunz told LiveScience. "They could tell which of the two states the atoms were in, but they scattered a lot of photons. In this experiment they managed to determine the state of the atom without scattering photons."

While the researchers were able to limit this disturbance, there will always be a certain amount of back-action caused by any measurement.

Ultimately, Maunz said, the experiment could help point the way toward quantum computers, which would use particles as bits to run complex calculations quickly.

"At the end of computation you have to read out which state [the particle] is in," Maunz said. "If you can read it out without disturbing the system, that's an advantage there."