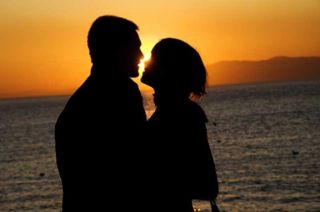 Dump the stereotype of the manly commitment-phobe. A new study finds that not only do men often say "I love you" first in relationships, they're often happier than women when they hear the three little words said to them.

The bigger happiness boost comes when a woman confesses her love prior to the couple having sex, researchers reported in June in the Journal of Personality and Social Psychology.

From an evolutionary perspective in which men value the opportunity to reproduce and women value commitment to raise offspring, the findings make sense, the researchers wrote. Men may prefer a pre-sex confession because it comes with the promise of getting some action in the near future. Women, on the other hand, would prefer the post-sex confession because it means the sex comes with a commitment.

The researchers recruited 45 students and other passersby at the Massachusetts Institute of Technology and asked them whether they thought men or women said, "I love you" first more often in relationships. Sixty-four percent said women were most likely to drop the L-word first. On average, the respondents predicted, women would say "I love you" 23 days before men. [10 Surprising Sex Statistics]

In fact, the researchers found after surveying about 100 undergraduates and 47 heterosexual couples of all ages, between 61 percent and 70 percent of people said the man had said "I love you" first in their past or current relationship. On average, men considered saying "I love you" 42 days before women did, suggesting that the difference was not just based on women waiting for men to make the first move.

Further study showed that, when asked to imagine a scenario in which their girlfriend said "I love you," men reported the biggest imagined happiness boost if the confession came before the two had ever had sex. After sex, men reported a slightly smaller happiness boost when the confession was made. Women, in comparison, were less impressed with pre-sex confessions, but became significantly happier if the "I love you" came after the couple had started having sex.