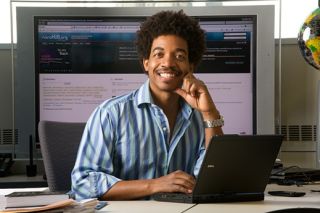 Jason Clark has an innate curiosity of how the world works. As a youngster, his curiosity led him to build a working-scale model of a volcano — on top of his mother's prized dining table. Mother was not amused. Clark's curiosity is now more focused. The enthusiastic young professor with the mega-watt smile received his B.S. in Physics from the California State University East Bay in 1996, and a Ph.D. from the University of California at Berkeley in 2005. In time, his interests moved away from rickety model volcanoes to complex engineered systems. He is now developing a computationally efficient, multidisciplinary, computer-aided engineering tool for micro- and nano-scale systems. In addition, he is developing measurement tools for the extraction of nano-scale geometry and material properties. Clark has held positions at the Lawrence Livermore National Laboratory; the Berkeley National Laboratory; Coventor; the Berkeley Sensor and Actuator Center; the UC Berkeley Biomedical Microdevices Center; and Wayne State University. He is the inventor of Electro Micro Metrology and the key developer of a CAD for MEMS package. He joined Purdue University in August 2006.

What inspired you to choose this field of study? I've always wondered how, asked why, expressed my creativity and thought about ways to improve things and solve problems. My mom asked what I wanted to be when I grew up and I said "inventor." She always supported me. She got me a geology kit once, but that didn't go well. She came home to a yard full of furniture and an extremely large volcano spewing smoke on her dining table.

After high school I didn't go straight to college. I got married, had a son, and worked here and there. Eventually this took its toll. I'll never forget my wife's face when I told her we should get rid of the expensive car, cancel our apartment lease agreement, and move in with my parents so I could go to college! I went and never left.

What is the best piece of advice you ever received? "You can do anything you put your mind to," my mom said that.

What was your first scientific experiment as a child?< My first experiment was to test a hypothesis of mine when I was 8. I tried to figure out why hubcaps on cars sometimes look like they are spinning backward. I figured the problem had something to do with timing. I read that TVs of the time were raster scanned, so I got a big fan and put it in front of the TV and examined both the TV images through the fan at various speeds, and then TV light reflecting off of the fan blades.

A second favorite thing is when students mix-in their own ingenuity into something I've taught them.

What is the most important characteristic a researcher must demonstrate in order to be an effective researcher? What's important for one is not as important to another. It's good that no two researchers are alike, and that each one has different motivations and ways of thinking. In general, I think it's good to not lose sight of the big picture and one's effect on the future.

What are the societal benefits of your research? I expect my societal benefits to be tools that facilitate health improvements and innovation rates. For example, I'm creating micro- and nano-scale metrology tools to help researchers better understand biological phenomena, which I hope will lead to better remedies and longevity. I'm also creating online, computer-aided design and engineering tools that may help researchers increase their rates of productivity, discoveries and innovations.

Who has had the most influence on your thinking as a researcher? Anyone who pushes through traditional boundaries and does something great. It can be scientific breakthroughs, new types of music, amazing feats in sports or overcoming overwhelming adversities. It's all inspirational to me.

What about your field or being a researcher do you think would surprise people the most? My wife asked me what I see when I look at a flower; she wondered if I saw its beauty or only thought about how molecules interact, how cells function, how it converts light to other forms of energy or what types of compounds can be extracted from it. I told her that I see all the artistic beauty that she sees plus all of those other things. That makes the flower even more amazing and beautiful.

If you could only rescue one thing from your burning office or lab, what would it be? My laptop data is backed up weekly, so I'd only loose a week's worth of work. My books, pictures, degrees and patent awards are replaceable. The only thing that isn't is a wooden puzzle my son made for me years ago. I'd save that.

What music do you play most often in your lab or car? Other than Prince, R&B and Smooth Jazz, I listen to a very large variety of music genres in my car. I like whatever sounds good.