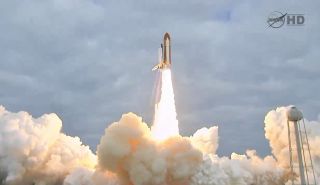 NASA's space shuttle Endeavour blasted into the sky Monday to begin its final mission, headed toward the International Space Station, where the six-person crew will spend 16 days delivering spare supplies and an ambitious astrophysics experiment.

Commander Mark Kelly will lead the crew. Among the 500,000 or so spectators was Kelly's wife Congresswoman Gabrielle Giffords, D-Ariz., who has been recovering in Houston after being shot in January during a community outreach event outside a Tucson, Ariz., grocery store.

The shuttle will carry into space a $2 billion astrophysics experiment called the Alpha Magnetic Spectrometer (AMS). The bus-sized device contains a magnet to search for space particles that astronomers hope will explain cosmic mysteries like dark matter and antimatter.

For continued coverage of Endeavour's 25th mission, go to SPACE.com.