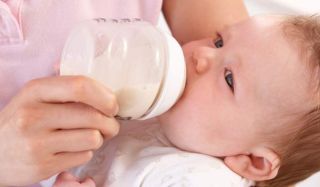 Yasmine Evjen, a graphic and Web designer in Chandler, Ariz., always planned to breast-feed her daughter.

When Evjen and her husband found out that she was pregnant more than a year ago, they asked around to their friends and family with children and decided that breast-feeding was the right choice for them. Not only did research show that breast milk has protective benefits for babies -- breast-fed babies have fewer ear infections and score higher on tests later in life than formula-fed infants, for instance -- but it would also be a much less expensive option than having to buy infant formula, she said.

"We never really thought it wasn’t going to work," Evjen, 22, told MyHealthNewsDaily. "It's natural, and I thought maybe it would be hard to get a hold of, but it will happen regardless, since it's what we are created for."

But after having her daughter Chloe, Evjen realized something wasn't right. Not enough milk was coming in to satisfy her daughter, who kept crying because she was hungry. Her pediatrician told her that it may take a few days for the milk to come in, so she should continue to try breast-feeding but also suggested supplementing the feeding with infant formula.

Colostrum, or "first milk," was providing the bare nutrients for Chloe, but the baby couldn't get full from it.

Evjen waited for a few days for her milk to come in, and soon, those days turned into weeks. She still wasn't producing enough milk to sustain her daughter.

Frustrated and not wanting to leave their daughter hungry, Evjen and her husband made the decision to switch to a friend's breast milk because she had pumped too much. When her friend's supply ran out, they made the switch to formula. (However, it's important to note that health experts warn that breast milk sharing can be dangerous if the milk has not been screened and pasteurized properly.)

It wasn't a decision -- or a financial cost -- they anticipated, Evjen said.

Anger is a natural reaction for moms who had always planned to, but can't, breast-feed, said Dr. Ruth Lawrence, professor of pediatrics at the University of Rochester Medical Center in New York. These mothers may not be able to pump milk adequately, or they might have a disease that makes them unable to breast-feed their children.

Evjen said her emotions ran the gamut of stressed, to angry, to feeling like a failure as a mother.

However, it's important for moms like Evjen to not feel guilty about not being able to breast-feed their children, Lawrence said.

Some babies have disorders where they need to drink formula. Other times, the mother tries to pump milk but the pumping doesn't work, Lawrence said.

"Some women will drip milk just thinking about it, but other women really have to turn up the pressure and they only get a few drops," she said.

And just because a mother has to formula-feed her infant doesn't mean she can't still reap the emotional benefits of feeding her child, Lawrence said.

"A mother should bottle-feed her baby as if she was breast-feeding," Lawrence said. "She should hold the baby close to her, and run the bottle down the chest wall as if the baby was breast-feeding. Get the eye-to-eye contact, and have all those mothering experiences. That's an important part of it too."

Formula is a good alternative

In general, infant formula is safe and a good alternative for moms who can't or don't want to breast-feed, Lawrence said. And unlike Third World countries that could have questionable water sources, mothers in the United States don't have to worry about mixing contaminated water with the infant formula, she said.

However, it's important for moms who never thought they'd have to formula-feed to research different infant formulas and to ask their pediatrician what's best for their children, Lawrence said.

"Pediatricians are trained to manage infant nutrition, and so a mother should not be reading ads, she should be talking to the pediatrician," she said. "Her pediatrician will help her with what will be best for her baby's needs."

The same goes for organic formula, Lawrence said. Even though one formula might seem as though it would be better than another for a baby, a pediatrician still knows the individual needs of the infant best.

However, infant formula is better and safer than cow's milk or evaporated milk because the formulas have been adjusted for baby's specific needs, she added. They have lower doses of protein and their fat levels have been adjusted to simulate human milk, whereas cow's milk does not contain enough vitamin E, iron and other nutrients that are necessary for a baby's development before age 1, according to the American Academy of Pediatrics.

But in the end, it's up to the medical community to make sure a new mother is aware of all of the difficulties that can accompany breast-feeding, Lawrence said.

"When a woman wants very much to breast-feed but has something happen, we need a better system for helping those mothers," she said. "And that's what I've been doing all my life, is trying to educate physicians to answer their needs and fix the problem."

Pass it on: Moms who always wanted to, but can't, breast-feed shouldn't feel like a failure because they have to resort to formula-feeding. They should consult with their pediatrician to find the best alternative for their newborn.