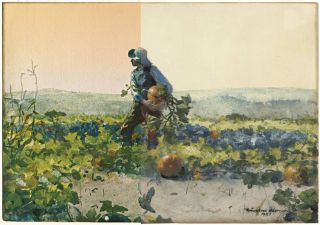 A digital recreation of Homer’s “For to Be a Farmer’s Boy”, simulating the appearance of the sky at sunset before fading, matched to the original, faded image.
(Image: © © Kristi Dahm, Loren McDonald, The Art Institute of Chicago)

First, they are both displayed at the Art Institute of Chicago — Homer’s painting represents a high point in the career of America’s premiere watercolorist, while Van Gogh’s painting is perhaps one of most recognizable paintings in the world. However, they also share a key physical trait.

“These breathtaking artworks are both painted with colorants that are sensitive to light, or, as we say in museums, they are ‘fugitive,’ meaning they quickly vanish if exposed to too much light,” says Francesca Casadio, A.W. Mellon Sr. Conservation Scientist at the Art Institute of Chicago (AIC). “Fading can dramatically change the color balance of fragile works of art and go so far as to obfuscate, in part, the artist’s intended effect.”

In “For to Be a Farmer’s Boy,” the sky is starkly blank—gone are the vibrant colors that Homer is known to have used for his evocative renditions of skies and seas.  Yet, through research funded by the National Science Foundation Chemistry and Materials Research in Cultural Heritage Science (CHS) program, a new story is being revealed about Homer’s painting.

After painstakingly peering through binocular microscopes, art conservators working behind the scenes at AIC discovered some microscopic particles of colored pigments trapped in the artwork’s paper fibers.  Precise identification of such pigments was key to “recognizing the implicit emotional, narrative and symbolic content” of the artist’s work, according to AIC curator Martha Tedeschi.

Nanotechnology comes to the rescue

Now, art historians and art conservators have one more tool in their arsenal to preserve our cultural treasures: Surface Enhanced Raman Spectroscopy (SERS). Although this technique has been around for almost 30 years, only recently has SERS fully realized its potential, thanks to the nanotechnology boom.

SERS is an ideal technique for art analysis — it is highly sensitive and can detect vanishingly small amounts of organic pigments that have long eluded identification by other approaches. Yet, only a handful of research groups are working on this application.

“Imagine a child in a sandbox with toys. The toys are the molecules – we want to study them, but they are hidden under the sand and you cannot see them,” explains Richard P. Van Duyne, the Charles E. and Emma H. Morrison Professor of Chemistry at Northwestern University, who is best known for the discovery of SERS. “Our technique gets rid of the sand so that you can see the toys and identify what they are.”

By using a colloidal suspension of silver nanoparticles as a “performance enhancing drug,” researchers, for the first time, can identify natural organic colorants on a single grain of pigment otherwise invisible to the naked eye.

Indeed, only a handful of pigment particles were available from the Homer watercolor.  Compared to reference 19th-century watercolor pigments available at AIC, these colorants were identified as Indian purple (cochineal precipitated with copper sulfate) and madder purple, two natural dyestuffs derived from an insect and vegetable-root sources, respectively.

The results indicate that in Homer’s “For to Be a Farmer’s Boy,” the “empty” sky once depicted a vibrant autumn sunset, with organic purples and reds, in addition to inorganic reds and yellows. Although these results are promising, there is still a need to improve the identification of pigments from severely faded paintings. This is because pigment particles are normally applied in a complex medium, which increases the fluorescence background of the spectra, much like adding more sand to the sandbox covers up the toys (molecules) below.

In order to reduce the fluorescence, research professor Nilam Shah, also of Northwestern, will be developing ad-hoc-tailored nanoparticles optimized to resonate with infrared lasers, which are less damaging to the artworks, and more universal. These next-generation nanoparticles hold promise as tools to unlock information on dyes, pigments and binding media, as present in Van Gogh’s “The Bedroom.”

Typically, researchers who use SERS for materials identification search an unknown compound against a database of references, much like matching fingerprints of known criminals to forensic evidence collected on the crime scene.

Thanks to the theoretical expertise of George Schatz, Morrison Professor of Chemistry at Northwestern, this painstaking database search will no longer be a limiting factor. In fact, researchers will be able to calculate from theory not only the expected SERS spectrum of unknown fugitive dyes, but also the tell-tale signs of dyes disappearing after prolonged exposure to light.

Taking into account the pigment identification by SERS and nuances of shade and tone that are typical of Homer’s paint handling, art conservators proposed a digital re-creation of the Homer watercolor.  By shining laser light on particles buried in the artwork, SERS investigators have now unearthed the materials evidence that allows viewers to truly experience the hues of Homer’s faded sunsets for the first time in modern times.

Editor's Note:This research was supported by the National Science Foundation (NSF), the federal agency charged with funding basic research and education across all fields of science and engineering. Any opinions, findings, and conclusions or recommendations expressed in this material are those of the author and do not necessarily reflect the views of the National Science Foundation. See the Behind the Scenes Archive.