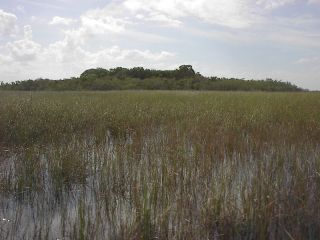 Heaps of trash left behind by prehistoric humans might have given rise to many of the tree islands found in the Florida Everglades, researchers find.

Tree islands are patches of relatively high and dry ground typically a yard or two high sprinkled throughout the marshes of the Everglades. They serve as havens of life, highly valued hotspots of diversity that provide nesting sites for alligators and refuges for birds, panthers and other wildlife avoiding high waters.

"There are thousands of them," researcher Gail Chmura, a paleoecologist and geomorphologist at McGill University in Montreal, told LiveScience. "Some of these are certainly large enough to support a cottage."

For many years, scientists thought the fixed tree islands — larger, teardrop-shaped kinds of tree islands often found in the main channel of the Everglades, Shark River Slough — rose from protrusions from the rocky layer of the mineral carbonate that lies beneath the marsh. Now, researchers suggest these islands might actually have developed from ancient garbage mounds left behind from human settlements about 5,000 years ago.

These piles of trash, known as middens, held mixes of bones, charcoal, food scraps and human artifacts, such as clay pots and shell tools. They would have provided areas high and dry enough for vegetation to grow, driving the formation of tree islands. In addition, any bones the piles held would have leaked phosphorus, a key nutrient otherwise scarce in the Everglades.

"This goes to show that human disturbance in the environment doesn't always have a negative consequence," Chmura said. "Hundreds to thousands of years ago, some of the things humans did actually created valuable ecosystems."

In a previous study of tree islands, archaeologist Margo Schwadron with the National Park Service cut through what seemed to be layers of carbonate bedrock at the base of two tree islands and found there was actually more soil and a midden below. Later excavations in South Florida found similar "perched carbonate layers."

Chemical analyses of these layers suggest they were made up of carbonates that had dissolved from the underlying bedrock and phosphorus from dissolved bones. Chmura and her colleagues suggest that during South Florida's dry season, tree roots drew in large amounts of groundwater, and the phosphates and carbonates dissolved within seeped out, coalescing as stonelike layers. The settlements that originally threw away this garbage might have been wiped out by diseases introduced by Europeans, she explained.

These perched carbonate layers are key in helping tree islands rebound after fires, researchers said. Since they do not burn, they protect the underlying soil and help keep the islands elevated, allowing vegetation to regrow there after fires. Chmura and her colleagues now want to see when exactly trees started growing on these islands to learn more about the island formation.

Chmura and her colleagues will detail their research on March 22 at the American Geophysical Union's Chapman Conference on Climates, Past Landscapes and Civilizations in Santa Fe, N.M.