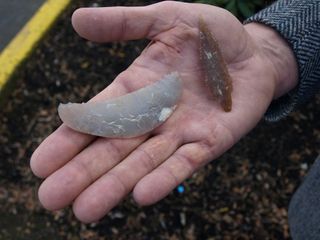 On the menu for the earliest colonizers of the Americas: seabirds, seals and sardines.

That's according to findings from three new archaeological digs on the Channel Islands off Southern California. The sites have yielded dozens of delicate stone tools and thousands of bone and shell fragments from meals more than 11,000 years old, researchers report in this week's issue of the journal Science.

The finds reveal more about how early Americans lived and ate, said study researcher Torben Rick, a curator of North American archaeology at the Smithsonian Museum of Natural History. The tools found also link the seafaring people of the Channel Islands to populations living far inland in North America, including the area that is now Utah and Nevada, Rick told LiveScience.

"These are very refined tools," Rick said. "Similar technologies had been found in the Great Basin, the interior of North America, [but] we didn't really have any on the West Coast, especially on the Channel Islands, found in situ." (In situ means the tools were found where they were left thousands of years ago.)

During the last several million years, the Channel Islands have been separated from the mainland by at least 11 to 32 miles (7 to 20 kilometers) of water. Archaeologists have long known that early North American Paleoindians made their way out to these islands: In 1959, human remains dating back 13,000 years were discovered on Santa Rosa Island, one of the five islands that now make up Channel Island National Park.

Back in those days, sea levels were lower, and Santa Rosa and its neighbor, San Miguel Island, were connected by land. The increase in sea levels is a problem for exploring coastal archaeological sites, Rick said, because any beachside settlements have long been swamped. Fortunately for archaeologists, the Channel Islands rise steeply out of the ocean, so less of the ancient coastline is now underwater.

Rick and his colleagues focused their search for traces of ancient inhabitants to areas where fresh water would have flowed. They found what they were looking for at three sites, one on Santa Rosa Island and two on San Miguel.

At the Santa Rosa site, the researchers uncovered 52 stone points called Channel Island barbed points. These ultrathin, serrated points look very unlike the hunting points used by Paleoindians in the Great Basin, said Charlotte Beck, an anthropology professor at Hamilton College in New York who was not involved in the research. But the researchers also turned up 15 stone crescents, which are another story altogether, Beck said.

Most of the tools were made of the type of stone found on the island. But one small flake, a bit of debris left over from tool-making, came from farther afield. This flake was obsidian, a type of volcanic glass. Chemical analysis sourced it to eastern California, 186 miles (300 km) away.

Along with the tools, researchers found bones and shells, the leftovers from many an ancient seafood buffet. The Santa Rosa site contained bones from rockfish and sardines, but was dominated by bird bone fragments. The presence of goose bones suggests that the site was a winter hunting camp, Rick said.

The San Miguel sites yielded more than 22 pounds (10 kilograms) of shell fragments. Evidently, the island inhabitants enjoyed crab, mussels and abalone, along with escargot — the remains of black turban snails were found, along with pitted stones likely used to crack the snails' shells.

The array of foods shows that the islanders were experts at extracting food from their environment, Rick said.

"They weren't just people who came from the interior and were trying to figure out a coastal life way," Rick said. "These were people who had lived on the coasts and knew how to exploit every facet of it."