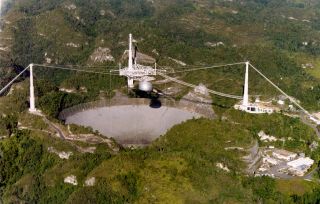 To learn about our universe—how it functions and how it changes—requires a vast exploration of neuron stars, black holes and physics. Bruce Allen of the Max Planck Institute for Gravitational Physics pursues the answers to these mysteries as he studies cosmology and gravitational physics. He is the leader of Einstein@home, a program that uses computer time donated by home and office computers around the world to process data from gravitational wave detectors. Einstein@home also searchers for radio pulsars using data from the Arecibo Observatory in Puerto Rico. Through Einstein@home, three citizen scientists discovered a new radio pulsar in data gathered by the Arecibo Observatory. Click here to learn more about this discovery.

What inspired you to choose this field of study? As a teenager, I was very excited about cosmology. The idea that our universe had a beginning, and that it was expanding, was fascinating. Then I started to learn about black holes and neutron stars, and the strange effects that gravity can have, and I was hooked.

What is the best piece of advice you ever received? I have gotten two valuable pieces of advice.

The first was circa 1979, when I was an undergraduate at MIT. I had worked for months on an experiment, but couldn’t get past a problem. The central component was a liquid-helium dewar, cooled to 4 Kelvin. But there was a heat-leak somewhere, and I couldn’t find it: when the dewar was filled with liquid helium, the liquid helium all boiled away very quickly, and I couldn’t do the experiment. One day, following an off-hand suggestion from one of the post-docs, I found a solution. That evening, I filled the dewar and this time, instead of boiling away, the liquid helium slowly evaporated. I was so excited that I stayed up the whole night in the lab, each 15 minutes measuring the liquid helium level and plotting it on graph paper to predict how long the liquid helium would last. When my advisor (Rainer Weiss) came into the lab the next morning, he found me still there, still excited, plotting the latest new point onto the graph. Then he told me something along the following lines: "I’m happy to see you so excited about this. It’s a good sign for your future as a scientist, because a scientific career doesn’t offer you fame or money. Instead, the reward you get is the satisfaction that you have when you solve a problem and something finally works out, so you get a result."

The second was circa 1983, when I was a graduate student. It was during a period when I was working hard on a calculation, and stuck, and I was getting discouraged. It was starting to drive me a bit crazy, and I asked my advisor (Stephen Hawking) about it. He told me that most of the time, in scientific work, your ideas don’t work out. Most things that you try will fail. Most new ideas turn out to have something wrong with them. So, normally, he said, you shouldn’t knock yourself out with work. Come into the office in the morning, and at the end of the day, put it down, go home and think about other things. But, if you work hard and you are smart enough, sometimes your ideas will work out. Then comes a magical moment when the walls come down and all the things you were confused about suddenly become clear. At that point, he said, you should forget about leading a normal life for a few days, and just work all the time, because it’s so much fun and so satisfying to move forward after being stuck.

What was your first scientific experiment as a child? I honestly don’t remember. I had a lot of toys growing up, and I used to constantly take them apart and put them back together and see what I could make by putting them together differently. I do remember some favorites: building electromagnets by winding wire around metal bolts, staining onion-skins and looking at them under a microscope, and building and crashing a lot of model rockets and model airplanes.

What is your favorite thing about being a researcher? The satisfaction of finding or making something new.

What is the most important characteristic a researcher must demonstrate in order to be an effective researcher? That’s hard to answer, because researchers, being human beings, come in so many different flavors. There are some researchers whose published papers are all correct, and each makes a little incremental step forward, but there’s nothing to get excited about. In contrast, there are some researchers, who publish papers that are mostly wrong. But then, once in a while, one of their papers is right, not wrong, and has a wonderful new idea or creative step forward that changes their subject or field.

In general, I would say that the most important characteristic is intellectual honesty (both with yourself and with others). If something seems strange or wrong, you can’t just ignore it, you have to think about it until you have really understood it.

Another important characteristic is a thick skin and tolerance for failure. At least to some degree, you need to trust your own judgement and ignore what 'everybody says.' And you have to keep in mind that if all of your ideas work out, this means that you aren’t trying hard enough!

What are the societal benefits of your research? An improved understanding of our universe, and therefore, of our place in the world.

Who has had the most influence on your thinking as a researcher? Without doubt, my parents, both of whom are scientists, and both of whom think about the natural world as a rational place that can be understood. Apart from that, certainly the two teachers I have mentioned above, Rainer Weiss and Stephen Hawking, and a mathematician named Gian Carlo Rota, whose philosophy course taught me to be more imaginative in my thinking about people and the world.

What about your field or being a researcher do you think would surprise people the most? I think most people do not realize how clearly we understand the large-scale (cosmological) processes that took place in our universe, starting from just a few seconds after the big bang, to the present times. We really have a detailed and accurate description, based on many experimental measurements and observations.

If you could only rescue one thing from your burning office or lab, what would it be? My laptop!

What music do you play most often in your lab or car? These days I am trying to learn German, so when I drive I listen to "NDR Info" which is a German-language news broadcast.